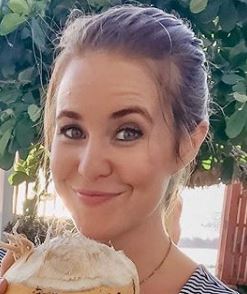 Jana Marie Duggar is an American television personality known for her appearances on TLC’s reality TV shows 19 Kids and Counting (2008—2015) and Counting On (2015—).

For many years, the show featured the Duggar family— parents Jim Bob and Michelle Duggar and their 19 children— nine girls and ten boys, all of whose names started with the letter “J”.

In a Sept 2020 episode of Counting On, Jana, the eldest one of the Duggar children, opened up about something she had never even hinted before.

Here’s what you need to know.

Jana Duggar stands tall at a height of 5 feet and 7 inches. Likewise, most lately her weight listed as 59 Kgs or 130 lbs.

In January of 2020, she turned 30 years of age. Every year, on 12th January she celebrated a joyous birthday with her larger-than-average clans.

Jana and her twin brother, John Duggar, were born two years after their older brother Joshua “Josh” James was born.

Then, in sequence, the rest of her siblings— Jill Michelle, Jessa Lauren, Jinger Nicole,

What Does Jana Duggar Do For A Living?

Impressively, Jana Duggar is to put a halt to a major family tradition i.e. the men in the family, are to make money while the women are left with the care for the home and children.

She was set to do something that the daughters or daughters-in-law in her family had never done before. In the Sept 2020 episode of Counting On, John revealed that Jana was planning to start her own business.

Later, Jana herself affirmed the news. She said the venture was still in the beginning stages. Getting into the details, she said that she was “hoping” to sell different things for the home.

Jana stressed that she wanted to expand into home décor as much as she can. “Probably adding different gardening things, tools, and stuff… Still brainstorming on it”— she seemed excited about her entrepreneurial journey. She added that the job was going to be mostly online. Although once it’s established online, she wished to someday expand to a “brick and mortar location” but she would want it small in the start.

Also, the parents seemed quite supportive of their girl’s entrepreneurship spirit.

Even before, Jana has always been open about enjoying doing things her own way. While her eight of her 18 siblings married young and are happy to be stay-home mothers/wives. (Jana is the eldest daughter in the Duggar family.)

What Is Jana Duggar Net Worth?

More into her career, Jana’s huge stride towards owning and running a business singlehandedly. And this courage of her even surprised and impressed her parents, her father Jim Bob in particular.

Several members of Jana spoke about her entrepreneurial endeavor. Michelle Duggar, her mother, remarked that Jana is the first girl (daughter) in the family who is set out to become a business owner.

On 11 April 2019, Jana filed all the necessary paperwork to incorporate her business and named her company Arbor Acres Group LLC in Arkansas Secretary of State. As of September of 2020, she is yet to set up an official website for the company but created an Instagram account with the title.

The page flaunted 1363 followers at the time of this writing with zero posts on it.

Speaking with pride, John David praised Jana for starting a huge business. Plus he acknowledged how she accomplished more than the boys in the Duggar family.

Whether intended or not, but she was certainly taking a huge step in changing the family history fo sharing ultra-Conservative traditions.

In addition to being a businesswoman, Jana also garnered attention as a reality star and social media influencer with 730k followers on her verified Instagram account.

On top of that, Jana ventured out creating a self-titled YouTube channel with 25.1k subscribers.

As Jana Duggar pocketed earning from multiple sources. Her business, TV shows from which she and her family made an average $20,000 and the sponsored posts on Instagram contributed hugely to her net worth of $400 thousand.

Who Is Jana Duggar Boyfriend?

Jana has never been one to follow the rest of the Duggar pack. People constantly questioned why Hana didn’t get married at a young age like her siblings, but she’s always been open about enjoying doing things her own way.

Putting everything aside, fans of the show and the reality star mostly focused on her dating status and as a top concern. Jana has been asked the same question so many times, anything related to relationship felt stale to her at that point.

Jana further insisted that there are other parts of life to talk about than a relationship. But hinting her wishful thinking from her past self, Jana noted that she wanted a relationship with a guy who lived near-by. And she had a must-have list for sure.

But as she matured, her preferences changed with time and she eased-up with the list. Jana discovered her love for travel though she never thought she did in the past. And if she actually fell for someone, she would go wherever the life took her with her ‘the one.’

While she fell victim to several stigmas regarding her choice for not marrying anyone, Jana brushed all of them off further away with a simple reason i.e. she never met the right person yet.

Jana Duggar denied so many attempts from her family and friends to set her up for a boyfriend, anyone could confirm that she was as single as they came. Plus, she spoke with excitement that she loved doing things on her own, as a single and independent lady.

Kendra Caldwell is the wife of Joseph Duggar — one of the stars of the TLC show “19 and Counting...