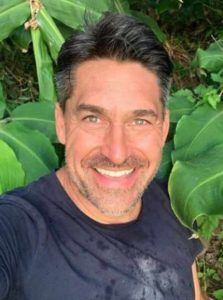 HGTV show Backyard Takeover star, Jamie Durie, is a perfect instance to an idiom, Jack of all trades; not to mention, he is also the master of all his endeavors.

Jamie is an Australian horticulturist and landscape designer, furniture designer as well as television host, television producer, and author. He authored eleven books on landscape architecture, garden design, and lifestyle.

However, all aware of his professional achievements, as it happens to be everywhere in online platforms like Wikipedia, it is actually his personal life that causes people to wonder.

So, you come to the right place, if you you have been all along looking for the answers regarding his parents, marital status, and more.

Jamie Durie comes from a family in Australia. He spent most of his childhood in the mining town of Tom Price in north Western Australia.

Jamie’s parents, Dave and Joy, split when he was only ten. At the time, they were living in a West Australian mining town, Tom Price. Then, Jamie including his mother and older brother, Chris, moved to the Gold Coast to be with their maternal grandparents.

Jamie was very close to his grandparents and he said it was “the nicest period” of his life.

Jamie’s mom Joy is a very busy woman who likes to be involved in many things including sewing, baking, bushwalking, and charity work for hospitals.

In an interview circa August 2018, Jamie confirmed on— Joy growing 60 different types of fruit and vegetables in her backyard. Plus, how she also taught local school kids local kids about growing a veggie garden. At the time, she lived in Cairns, to be closer to Jamie’s older sibling, Chris, and his kids.

Almost eleven years after he graced the cover of Men’s Health, Jamie in November of 2018, was only two weeks away from looking like his younger self. He took to his Instagram a picture of his decade-younger self, to talk about his new weight loss.

He later revealed the magical formula to his weight loss. 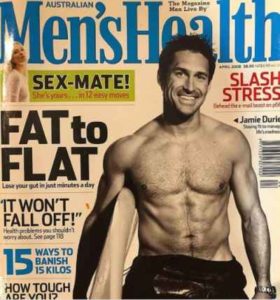 The House Rules star-judge said, he used sea kayaking, spin classes, and bike riding for his cardio. Plus, for training, three days-a-week, he included free weights followed by 45min on the bike. And when all these were taken care of, he paid equal attention to his diet as well.

Also, the fitness-fanatic, standing to 5 feet and 7¾ inches (1.72 meters) in height, said yoga and meditation was and continued being an important part of his fitness regime for the longest period.

Jamie Durie, most lately the founder and director of a design company PATIO Landscape Architecture and Durie Design, reportedly hoarded a net worth of around $30 million.

Reports claimed he owned properties in Pittwater, on the Northern Beaches of Sydney, Australia, and in Los Angeles.

Before the march of 2019, his home in the Hollywood Hills in California was relisted for USD$2.75 million but was later withdrawn from sale.

Embarking on his fifties, and Jamie Durie had never once been married before.

Talking to The Sydney Morning, he was candid about his affairs in the past. He said how his trait of always being career-focused suffered some of his relationships in the past.

By 2020, Jamie Durie had been engaged three times but never exchanged the vows of a husband and wife.

Around the 1990s, Jamie was in a relationship with Teresa Livingstone. They would eventually break up but only after getting engaged.

Jamie was then engaged to Siobhan Way, a jewelry designer. Circa 2005, he and now-former fiancee called off their engagement.

Not the one to give up that easy, Jamie then fell in love with Nadine Bush. However, this romance too would see its end after two years.

Following a blissful dating period, Jamie popped the big question to Lisa Christie. Sadly, the third time didn’t prove a charm for the HGTV star. Upon learning about his cheating ways, Lisa broke off their engagement.

In the prior mentioned interview, he continued to tell his story. Referring to his daughter, with ex Michelle Glennock, he said:

“I have had some amazing relationships with women but life is a constant roller-coaster…I have been married to my career, but I have also been able to share that with special people in my life, including my daughter.”

Although Michelle stopped being his girlfriend, the two amicably co-parented their daughter, Taylor (b. circa 1996). 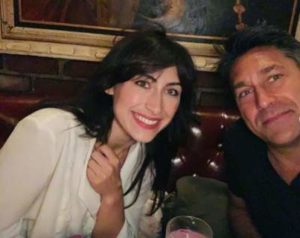 Jaime met Michelle (then a Las Vegas showgirl) when they were both 18 years of age. Eventually, Jaime became a father in his mid-20s.

Jaime continued speaking about his only daughter and the mother of his child (in August 2018):

“Michelle and I are the best of mates now. She and her husband stay at my house in LA and they have a young daughter. We’re one big happy family.”

While Jaime also found a great-buddy in his beautiful daughter. At the time, after four years at university, she was following in her father’s footsteps to become a floral designer.

Back as a teenager, Jamie got his showbiz start as an exotic dancer in the Australian all-male stripping group called Manpower Australia.

The very job Jamie started in the 1990s and did until he was 26, led many people to draw the conclusions of his being gay, which now only seems to be a baseless rumor.