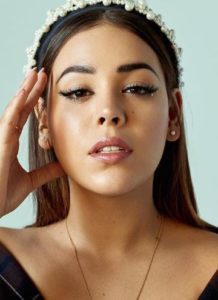 Danna Paola is a multi-faceted talent who has been famous for the largest part of her life.

Initially starting as a singer/actress when she was just 4, Dana went on exploring different front of the entertainment industry. Her career as a model and fashion designer also flourished abundantly solidifying her name in the said industry.

In Netflix’s teen drama Elite, she portrayed Lucrecia Hendrich which was well-received by all. As of May 2020, she has been credited with over 44 appearances in TV shows and movies, and music videos.

Scroll down this wiki-format article based on the life of Danna as the personal and professional details unfolds which was set for the readers’ entertainment.

How Old Is She? Bio, Nationality & Ethnicity

The Mexican-pride turned 24 years old while celebrating her birthday in 2019.

Getting into her family details, The Mexico-city native was born to Patricia Munguia and Juan Jose Rivera Arellano.

The Netflix star wasn’t able to enjoy the love of her parents in unison as they had separated when she was young.

But her sister Vania Rivera accompanied her to get through the trauma that was brought by the split of her parents. She is a social media influencer with over 134K followers. 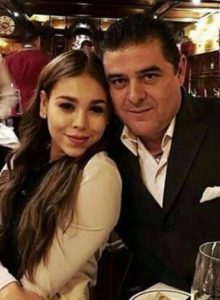 Danna and her father in 2019 (Pic: Juan Jose Rivera’s Facebook)

Even though the relationship of her parents got sour, she maintains a close connection with both of them. But she spends most of her time with her beautiful mother.

Talking about her acting career, when Danna Paola was 4 she landed a part in Plaza Sesamo. Following that, she starred in Rayito de Luz (Ray of Light), a Mexican soap opera show.

She also did a voice actor in Spanish dubbed version of the animated movie Tangled (2010).

Getting into her musical escapades, Danna released her debut studio album in 2001 under Universal Music titled Mi Globo Azul. The album was followed by her sophomore album Oceano and the 2019 album SIE7E.

Danna Paola flaunts her desirable body on her Instagram which has over 18.1 million followers. She had modeled for Elle-Mexico and Badhombre magazine.

In 2016, she was featured as the new face of L’Orela Paris’s hair color line in the Latin-American market.

Diving into the relationship history, Danna Paola reportedly had been in 4 publicized relationships and rumors.

She had dated Atrévete a Soñar (2009) co-actor Eleazor Gomez from 2009. As Eleazor was over 30 years of age, so he didn’t entertain coming out together as a couple in public due to the age gap. The relationship lasted almost 5 years, splitting in 2014.

Danna was broken-hearted after the end of her relationship. But, actor Eugenio Siller came into her life providing comfort. The couple met while they were filming ¿Quién es quién?. The relationship carried on for a brief period and they parted their way shortly after.

In 2018, the “Oye Pablo” songstress was rumored to be dating her Elite co-star Miguel Bernardaeau but the rumored relationship floated about with no confirmation from either of them. 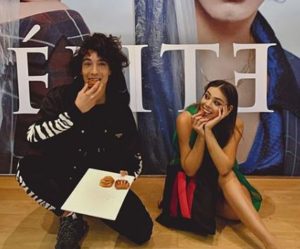 Since 2019, she was rumored to be getting all lovey-dovey with Chilean actor Jorge Lopez. But by the end of 2019, she claimed she was single and happy turning down the romantic rumor between the two.

Danna Paola and Itzan Escamilla were also a thing at the time. In her Instagram account, she posted pictures of two with the caption “My itzanlaurant love u“. Like a few of her past relationships, it went by unconfirmed.

So conclusively, Danna could’ve shared the wedding vows with Eleazor Gomez had the relationship lasted. But besides that, she hasn’t been in a relationship long enough to see herself getting married.