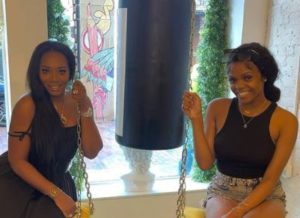 It was at the end of Love and Hip Hop: Atlanta season 8, Infinity Gilyard first came to the limelight — after Yandy started the cumbersome process to adopt her. But fast-forward to two seasons more, Yandy was still struggling to move forward with her. The only difference now was that Infinity was adopted.

Infinity Gilyard was in her seventh grade when she first met the LAHH star, Yandy. She recalled that her future mother popped up one day during her mentorship program and started looking after her. (Infinity was later kicked out of the program by Yandy in March 2020.)

Finally, after some trials and tribulations, Infinity was legally adopted in December 2019.

If you don’t know, Infinity not only gained a mother after adoption but she met a sweet father Mendeecees, and two siblings named Skylar Smith and Omare Harris.

As of 2021, Infinity’s adoptive parents weren’t having the easiest time as Mendeecees was just released from prison. However, they were still going strong.

Infinity Gilyard’s biological family might have remained anonymous in Love and Hip Hop but here we are with the facts!

Her biological mother is named Lorraine Gilyard, and she is a mother of six (including Infinity). One of Lorraine’s Facebook posts had a picture of Infinity and her biological big brother Ice, captioned, “Look At Ice And Infinity Throwbacks Are The Best.”

According to Lorraine, her daughter Infinity was a liar. She claimed that Infinity was in the foster care system only since November 2017, and she had a few behavioral issues, such as sneaking out at “2 a.m. or 3 a.m” and being defiant.

But despite pointing fingers, Infinity still loved her biological family, and often spend time with them.

Corresponding to her birthday, Infinity is of the Pisces zodiac.

Infinity Gilyard was attending the City College of New York when she revealed her decision to drop out and pursue YouTube full-time in 2021. But it wasn’t because she hated studies. In fact, she finished her first semester with a 3.5 GPA. Rather, Infinity was having a time management issue, and decided that college was only “distracting” her from her “bigger purpose in life and (her) goals.”

But from the looks of it, Infinity seemed serious! She shared that she understood the risk of dropping out of college, and didn’t care about what her family said.

Trivia: During Infinity’s time at the City College, she mostly spent her nights in the college dorms because of her late basketball practice.

Talking about basketball, Infinity loves it! She played for the Panthers while attending City College and shared a “long journey full of ups and downs” with the team. She said, “I’m a panther NOW & forever! I’m bleeding blue forever…thank you to my coaches & teammates for believing in me & allowing me to be a part of something great.”

For high school, Infiitnty went to Cristo Rey in Brooklyn.

Infinity Gilyard flaunted a net worth of above $250 thousand by 2021.

By now, it should be clear as a day that Infinity aspired to be a Youtuber. And with already over 44 thousand subscribers to her name, Infinity was making her way to the top. Her videos then mostly featured her vlogs, beauty appointments, and challenges.

Over IG, she described herself as an “influencer, content creator, and entrepreneur.”

Wondering about her entrepreneurship? Well, she ran her own beauty, cosmetic and personal care company called BYOND INFINITI. As of 2021, it had shipped over 200 orders and garnered 6.2K followers over IG.

Just in case you are searching for Infinity’s website, it was being revamped (as of July 2021).

As of 2021, Infinity Gilyard’s love life remarried a mystery to us. She didn’t share any details about her dating life over her socials then. However, this wasn’t always the case. Back in 2017, Infinity talked a lot about her boyfriend over her FB. From wanting to have a boyfriend to revealing their romance, Infinity has done it all over her status.

Infinity’s ideal boyfriend would be someone who is “loyal, trustworthy, and real”. He should involve her in his family time, FaceTime/call her at any time of the day and make her smile.

Also, Infinity added that a “date to the pizza shop, McDonald’s, Burger King, or the Chinese store” would be better than a fancy one.