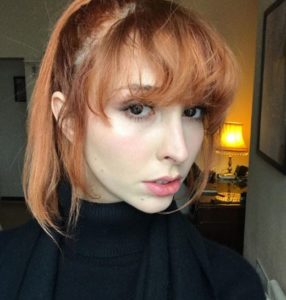 Looked like the romance between actor Thomas Brodie Sangster with his girlfriend Gzi Wisdom seemed to be over as he was spotted with a new girlfriend in London in Aug 2021. The heartbreak and end of the relationship might have brought anguish upon Gzi Wisdom, but, it also brought attention towards her.

Learn more about Gzi Wisdom where we cover details on her gender, net worth, real name, and parents.

Gzi Wisdom Gender: Was She Born A Man Or A Woman?

Gzi Wisdom was born a girl. Her Instagram, which is no lesser than her modeling portfolio, contained pictures of her as a young girl. So, there shouldn’t be any doubt on whether she was born a man or a woman.

However, some IG posts made her sexuality unclear. Gzi shared a snap of herself where she was extra affectionate with her female friend. But, she dated Thomas Brodie Sangster publicly. So, many made assumptions that she might be bi-sexual, and one IG user even said it aloud.

But, Gzi neither confirmed nor denied it.

What Pronouns Does Gzi Wisdom Use?

Born in Australia, Gzi Wisdom was welcomed by her father Olli Wisdom and her mother Jade who AKA (@rennisboon) as their daughter in Byron Bay, New South Wales. Having parents with eccentric personalities, Gzi also inherited the same from her parents.

More insight regarding her parents: Olli Wisdom hailed and lived in London, United Kingdom. He is a British Goa and Psy musician, and clothing producer, who is residing in London. He uses the alias Space Tribe to record his music. On Instagram, he goes by the name (@spacetribemusic) where he had 44.8k followers.

As for her mother, Jade receives mother’s day wishes from Gzi. Jade’s  IG showed that she has an interest in horse riding. On 29 May 2021, Gzi shared a picture of her mother as a young lady dressed in a hippie style when she attended Byron Blues Festival.

Besides her parents, Gzi is also close to her uncles Julian Wisdom and Miki Wisdom, and her cousins, Stella Wisdom, Elvis Wisdom, Jasper Wisdom,

Sice Gzi was born in New South Wales, Australia, the place where her mother belonged, and also born to an English father, she is of Australian-Brit ethnicity.

What Is Gzi Wisdom’s Real Name?

On 16 March 2015, Gzi Wisdom shared a snap of her Practical Driving Test Pass Certificate. On the certificate, her real name was written, Miss Gzi Infinite Wisdom. Hence, it might seem unconventional to have such names, but it was her real name.

Gzi Wisdom stands tall at a height of 5 feet 9.5 inches (1.76 meters). She weighed nearly 67 kilograms (147 lbs). As for her distinct features, she has freckles on different parts of her body. More importantly, Gzi reminds us of actress Julie Delpy from Before Sunrise.

No, Gzi Wisdom doesn’t seem to be on TikTok. But there is a Fan TikTok page that goes by the handle name (@gziwisdomx). The platform had 1,259 followers. The videos earned nearly 74.9k likes for the videos that she posted.

On Instagram, Gzi went by the name @gziwisdom. She had 197k followers where she gathered 452 posts in total. She is also on Twitter under the handle (@gzibieber). Her account garnered 305 followers. She tweeted only 38 times.

On Facebook, Gzi uses her real name where she posts occasionally.

Gzi Wisdom must have a net worth of under $450 thousand. She keeps her pocket full with modeling gigs and promoting local brands on her social media. She is an influencer who promoted Blue Bella, a lingerie brand, but most importantly she is dedicated to establishing her life and career as a model.

Her Instagram serves as a portfolio where she isn’t afraid to go nude sometimes. Gzi loves the art of permanently inking her body with a needle. Her body contains several tattoos which she flaunts on her Instagram.

Gzi runs her own fashion shop called Depop, which offers a range of vintage clothing. She has also composed a track called Morning Sun. The track is available to stream on SoundCloud.

The model also created an alter ego for herself named  Bella de Bourjois. According to Gzi, that alter ego of her is fueled by American candy and South American drugs only.

Gzi has also modeled in a music video of Hotel Lux named Ballad of You & I.

While Gzi Wisdom and Thomas Brodie Sangster appeared together, where the actor introduced his new girlfriend on the Internet on 2019’s Valentine’s Day, they were linked back with each other back in 2018. He appeared on her social media for the first time in early November 2018.

Thomas’s girlfriend Gzi wrote, “Romance and Shit”, Instagramming a picture of them together.

In September 2019, the young duo was seen on Malibu beach. The media spotted a shirtless Thomas having fun with his girlfriend Gzi on a hot Saturday. 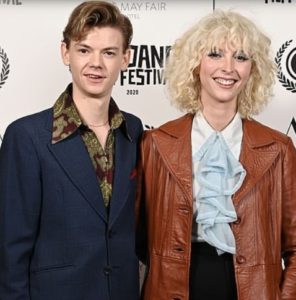 Thomas and his girlfriend Gzi at Stardust film premiere.

The attractive couple was spotted together at the Stardust film premiere. In the event, Thomas rocked a navy blazer and a matching pair of trousers whereas his girlfriend wore a white shirt and a black pencil skirt.

As of 2021, Gzi Wisdom and Thomas Brodie Sangster didn’t end up together as a married couple.

In early August 2021, Thomas was spotted getting cozy holding hands with Talulah Riley who was previously married to Elon Musk. The allegedly dating couple were playful as they stepped out laughing and playing in London.

Before Gzi, Thomas dated Patience Harding but they broke up in 2009. Then, he started seeing Isabella Melling.