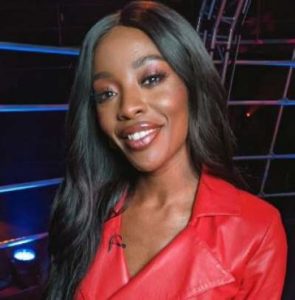 Meet AJ Odudu, who has been confirmed as a contestant for the Strictly Come Dancing new series (19th Season).

AJ is already a renowned name in the UK’s showbiz especially the TV industry.

The TV presenter is mostly known for her stint of presenting online and social media coverage for The Voice UK.

Now, before the series’s expected arrival in September 2021 on BBC One, discover AJ Odudu’s partner, height, net worth, and family-related stories.

Strictly Come Dancing‘s line-up announcement on Aug. 5, 2021, confirmed AJ Odudu as one of the first three celebrity contestants for its new series. The Twitter revelation read: “We are so ready to reveal the #Strictly class of 2021! Meet our first three celebrities…”

The One Show had the honor of letting out the big secret, and the third of the first trio of dancing stars i.e. AJ told host Alex Jones that her own mum did not know about her role on Strictly Come Dancing.

AJ shared, even before heading to London for The One Show announcement, she had to lie to her mother about where she was going.

Born with the traits of an Aquarius, AJ Odudu celebrated her birthday every year on February 12. In 2021, she reached the age of 33.

AJ Odudu lately took to her Instagram to write that everyone has been so kind to her since the Strictly Come Dancing news. She shared her Nigerian parents and of them too her mum particularly was happy as the TV program is literally her favorite show. 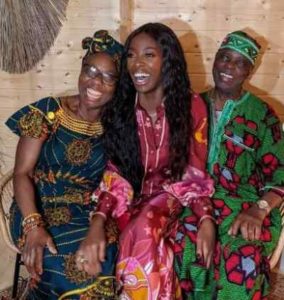 Her mum Florence Odudu and dad Denis Odudu (who turned 80 in 2019) had an arranged marriage. As of the date, they have been married for more than 40 years. This, we learned, when AJ sought an eligible partner in Nigeria in Manhunting With My Mum on Channel 4 in 2018.

Although AJ later concluded that the show was not a genuine search for a husband, about her second-generation search for identity, she did meet some potential candidates.

Anyway, AJ’s mum (who also featured on Women’s Health UK with AJ) admits being a mother of 8 and grandmother to 11 on her Instagram @auntyflorenceo.

AJ grew up with her seven siblings

As a certified personal trainer and sports nutritionist, she has a huge passion for health and fitness.

AJ, then, had entertained close 3.7K followers on her ‘AJ Odudu’ Facebook. And she did not seem to be on TikTok at the time.

Her social media is a place where you may expect her to share mostly her “behind-the-scenes from work and fun, food, fitness, and fashion.”

Besides making a name as one of the UK’s most exciting TV presenters, AJ also worked as a contributing editor at Grazia UK by Aug. 2021. Grazia UK, if you don’t already know, is a weekly women’s magazine that is claimed to be “the number one destination for smart and stylish women.”

Eventually, The Voice UK happened when she was also presenting gigs on the likes of Don’t Rock the Boat and Apocalypse Wow.

Not to miss, AJ acquired a degree in English & Politics, and over the years, her love of writing has seen her write articles on issues of relevance including Black Lives Matter for the likes of Vogue and Grazia.

AJ has had a variety of successful brand campaigns also with Adidas, Visit England, John Lewis, Bumble, and L’Oreal.

The all-rounder also proved her craft for lifestyle, and interior design when she documented her DIY renovations on her home-specific IG @homewithaj.

AJ Odudu Partner: Is She Married Or Still Dating?

AJ Odudu mentioned a former partner when talking about lockdown, wellbeing, and cooking a perfect hotpot with Lancashire Post in April 2020.

In November, AJ had also discussed being single and why the second lockdown has scuppered her chances of meeting “The One” with MailOnline.

Then a year before, around Oct. 2019, AJ Odudu was on Celebrity First Dates Hotel partnered with Duke, a then 31-year-old mortgage broker from Essex. Duke was back then considered a perfect match for AJ. And she seemed equally wowed by his appearance. (Fans were as smitten as AJ.)

Following their first date, the couple was believed to have stayed on to enjoy their summer of romancing together. But then no one knew what transpired beyond. And they definitely don’t seem to be dating now that AJ is taking herself on a new TV journey.

That been said, we believe, the details must have sufficed your “Is She Married Or Still Dating?” query.

Having made peace with “2020 is not the year for my love life” — AJ Odudu was hopeful to finding a partner the next year.