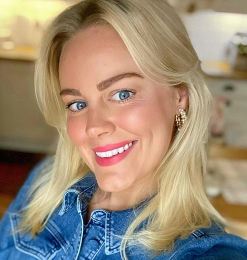 Georgia Townend soared to fame as a contestant in 2021’s Love Island. The Essex-based bombshell already had eyes on three existing contestants. Georgia also shared about her taste in men and her ideal partner. Admittedly, she came in ready to win the whole thing much like her fellow contestants.

Scroll down, as this Georgia Townend Wiki brings details on her age, height, and family.

While the Love Island villa was filled with drama and breakups along with chances of a few contestants getting kicked out from the show, Georgia Townsend made her debut alongside Abigail Rawlings and Tyler Cruickshank. Two love island contestants were set to be dumped from the show, and the contestants on the high risks included Lucinda Strafford, Chloe Burrows, Toby Aromolaran, Danny Bibby, Teddy Soares, and AJ Bunker.

Similar to Abigail, Georgia Townsend had her eyes on both Teddy and Aaron. But, her first choice to mingle with was Hugo Hammond, the contestant who hadn’t found a perfect match in any of the girls in the show.

Before Georgia entered, she shared that she would have great chemistry with someone who can have a solid flirt to roast ratio. He must be able to tease her but treat the things that she liked with respect and with the clemency that they deserve. She added: “I don’t want someone that is really vacuous and isn’t aware of what’s going on in the world.”

As for her ideal partner, Georgia noted her celebrity crush is Johannes Huebl.

Georgia Townend was 28 years old as of July 2021. She celebrated her birthday on 1 January. She is a Capricorn by zodiac sign.

Georgia Townend is a British-Australian individual who has families in both countries. While she hailed from Essex, some of her family members still live in Australia, including her sister.

But, Georgia spoke almost nothing about her parents. Not a single details exist on her father and mother. So, we believe it is because of the Love Island policy to keep all of the details extremely private.

The only member who is known in the family is her sister Brodie Isabella Townend. Isabella is an animal lover and loves spending time outside with her friends. She is on Instagram (@brodieisabellatownend) with 1400 followers and posted 82 times on the platform.

The Townend sisters are look-alike and very close to each other. On one of the posts, Isabella shared the happiness of Georgia being in town. In 2019, she wrote a caption for the post: “Nice to have my professional photographer in town.” The snap was taken on Tallebudgera Beach.

From that point on, Georgia started living permanently in Essex. She has been living in Essex for several years based on the photo which was taken in 2016.

Georgia Townend stands tall at a height of 5 feet 7 inches (1.70 meters). With her light complexion and blonde hair, she is a stunner with measurements of 34-26-35 inches.

Love Island star Georgia Townend must have a net worth of $300 thousand, the only way she can afford the lifestyle that she lives.

Georgia Townend has a day job as a marketing executive before she decided to enter the Love Island villa. But, the company that she has been working with remains unaddressed. Moreover, she must have a LinkedIn profile, but like her social media pages, she must’ve removed it for privacy reasons.

According to Glassdoor, an average marketing executive makes ($49,000) £36,000. But, the salary may fluctuate based on the experience level. So, she must make a similar figure as her salary.

Going by her lifestyle, Georgia is earning more than enough to meet her needs. Like her sister, she is also a traveler who has traveled to places. Also, she loves animals. She also spends her time visiting farms.

Georgia was seen at Halifax in West Yorkshire, and in Cobham, Surrey. While visiting Australia, she also lived in Lone Pine Koala Sanctuary in early 2019.

Talking about education, Georgia graduated from Harper Adams University in 2015.

Much like the details on her parents, Georgia Townend’s love life is also a mystery. She must’ve dated at least once in her life, but she hasn’t left even a single hint pointing at her previous relationships. Her IG has limited posts, demonstrating her luxurious lifestyle, but not a single post was related to her past boyfriends.

Plus, the fact that Georgia was on a dating show meant that she was single when she signed up for Love Island 2021. In fact, Georgia was single for 5 years, which is a mighty long time. She also shared that, she had exhausted all the other options on meeting people.