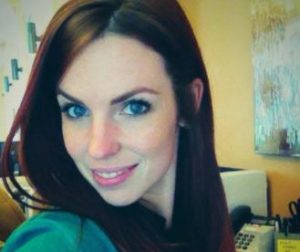 A lifelong Married at First Sight fan, Brett Layton was on cloud nine after making it to the cast of Lifetime’s reality show in season 13. This was the first time Brett ever got featured on Television.

So, who is she? Stay with this Brett Layton Wiki to find out.

Brett Layton was born on November 10, 1987. That made her 33 years of age in 2021; two years younger than her MAFS husband Ryan Ignasiak.

As per her birthday, Brett is of the Scorpio zodiac.

You might be surprised but some of Brett Layton’s family members have the same names. Yes! Understandably, Brett’s dad inherited the name of his father Donald H. Layton, but strangely even Brett’s mother Nancy has the same name as Donald’s mother.

Reportedly, Brett’s grandmother “Nancy Eileen Layton” was employed with the U.S. government as an analyst, and also served the nation as an Air Force veteran between the Korean and Vietnam wars. Unfortunately, she passed away on Nov. 28, 2012, at the age of 75.

Her siblings and cousins included Shannon, Jennifer, and D.J.

According to Brett’s Lifetime profile, she was born in Brick Township, New Jersey but considered Houston to be her hometown.

Mentioning her distinct features, Brett has blue eyes, reddish hair, a long triangular face, and bunny teeth. Also, she has a small plant tattoo over her left arm.

Also, her cover picture then preached about “love” — Love is patient, Love is kind. It does not envy, it does not boast, and so on…

Brett Layton is an educator. As of 2021, she was working as a teacher for over 6 years at Cypress-Fairbanks Independent School District in Cypress, Texas.

Before that, Brett took on a job as a community assistant manager for The NPR Group LLC from Feb 2012 to 2015.

From  2010 to 2012, she also worked as a leasing special for companies; Greystar and Capstone Real Estate Services.

She has also been a customer service senior who joined Best Buy in 2006 and went on to work there for 4 years.

To highlight her education, Brett attended Lone Star College System from 2006 to 2009 for her associate of arts, elementary education, and teaching degree. Reportedly, she even made it to Dean’s list and Honor roll there.

Then in 2012, Brett joined the University of Pheonix for her bachelor’s degree in English. She graduated 3 years later.

Just in case you don’t know, an average public school teacher in Katy, TX made around $60 thousand per annum.

The Married At First Sight experts paired Brett Layton with Ryan Ignasiak after noticing a lot of core similarities between them. It seems that the pair both wanted to have a home and family of their own, but they each felt like their time was running out.

As per Brett, she believed that marriage would enhance her life, and was willing to trust the process as a pragmatic hopeful romantic. In fact, she described herself as a “hopeless romantic,” who hadn’t dated or kissed a guy in years.

But yet, Brett was here on Married At First Sight, trusting the experts to her the perfect partner who was a good listener and would be open to discuss every possible subject with her.

Furthermore, Brett is a huge supporter of loyalty and hoped that her marriage would stand the test of time.

Likewise, Ryan (a “reformed serial dater”), on the other hand, was constantly pressuring himself to find a perfect lover for him. He wished to get married while he was still active and young. Someday, he wishes to coach his son’s baseball team and fight off his daughter’s suitors.

Overall, Brett and Ryan were a perfect match for each other. However, the experts pointed that this common desperation could also be a source of problems for the two.

As of July 2021, Brett and Ryan’s marital status wasn’t known. Although the filming of the series should have ended by now, none of them revealed any spoilers for the show. But, like many others, we do wish that the two were still married and would go on to have beautiful kids just as Ryan planned.