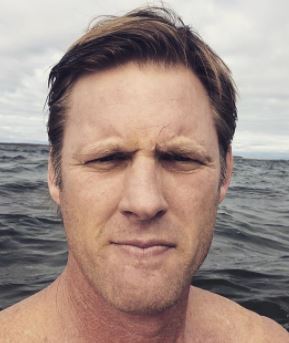 In November 2020, the Real Housewives of New York star Luann de Lesseps was spotted with a new beau, Garth Wakeford.

After her divorce in 2017 from her ex-husband Tom D’Agostino, Garth was the second man Luann let into her life. But this time, Luann seemed like she was ready to find love again.

So who is Luann’s new boyfriend? Find all about him over this wiki-style article.

Garth Wakeford was 49 years of age in 2020. That makes him 6 years younger than his girlfriend, Luann.

Information on his birthday wasn’t shared. Thus, his zodiac couldn’t be established either.

As for his interests, Garth loved to working out and spending time in the ocean. Also, he is a dog person. His dog “Cian” was often seen with him on his workouts. Sometimes he also carried Cian simultaneously as he worked out.

Though Garth Wakeford is of American nationality, he originally is from a South African background.

Talking about his family, Garth has a beautiful mother. On Mother’s day 2020, he took it to Instagram to thank her for “being there in my darkest hours and laughing with me when the sun shines.”

Unfortunately, his father passed away a long time ago. His family said that Garth looked a lot like his dad.

As for his siblings, Garth has two brothers named David Wakeford and Ryan Wakeford.

Mentioning his distinct features, Garth is a big man with a ripped body.

As of November 2020, Garth entertained 1.3K followers over Instagram @garth_wakeford. He mostly uploaded pictures and videos of his workout over there.

Garth Wakeford is a fitness trainer and writes himself as “an ex-professional athlete and army officer with a unique skill set at managing the needs and expectations of my clients.”

As a personal trainer, Garth founded and coached at Wakeford Wellness (2020) and Wakeford Holdings and Palm beach Partners (2011). Also, he worked at LA PALESTRA in New York, a state-of-the-art facility in 2002.

He claimed to have dedicated his life “to helping others achieve their most healthy and fulfilling lives.”

Before his job as a trainer, Garth was a professional Rugby player. Passionate since an early age, Garth was already playing for Eastern Province and College Rovers in South Africa and London Scottish FC and Bury St Edmunds RUFC in England in the 1990s.

Also, he was an active member of the Vancouver Rowing Club in 1999 and the president of Montauk Rugby Football.

In light of his education, Garth attended Rhodes University for Bachelor in Kinesiology and Exercise Science from 1991 – 1994.

It was November 2020, when Garth Wakeford and Luann De Lesseps were first spotted dating. They were seen leaving eatery Tutti Di Giorno in East Hampton in their warm cozy clothes.

After their date, the duo hopped into Garth’s convertible Mercedes and drove off together. Though both of them didn’t confess their relationship, fans were sure that the couple would be engaged soon.

However, this wouldn’t be Luann’s first or second wedding if the lovebirds decide to tie the knot.

Luann was previously married to Tom D’Agostinoin on December 31, 2016. Unfortunately, she got cheated on by Tom with his ex-girlfriend, Missy Pool, which ended their marriage in August 2017. After her divorce, she was dating the talent agent Rich Super in 2018.

Also, her first marriage was with Count Alexandre de Lesseps from 1993 to 2009. They share two kids named Victoria and Noel who were 26 and 24 years of age in 2020. And though Luann divorced the French aristocrat and entrepreneur with the honor “Count”, she chose to keep the title of “Countess.”

You may like – Gabby Barrett Wedding, Dating, Baby, Net Worth, Height