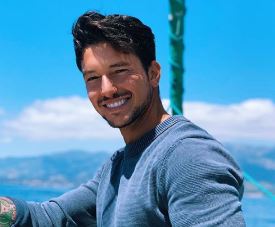 Starring in Netflix’s “Say I Do,” chef Gabriele Bertaccini became an international sensation.

What’s more, many dubbed “Say I Do” a perfect blend of the hit shows: “Queer Eye” and “Say Yes To The Dress.”

Per the premise of the show, Gabriele and his cast — Thai Nguyen and Jeremiah Brent — worked tirelessly to make the couple’s wedding day memorable.

Delve into Gabriele Bertacinni’s wiki and read about his wife, girlfriend, and net worth. Furthermore, discover his height, family, and businesses.

In late-2019, Gabriele Bertaccini turned 34 years of age. Likewise, he woke up to birthday messages on his phone on 18th December.

As of 2020, Gabriele spent his time between New York, Arizona, California, and his hometown, Florence.

Born and bred in Italy, Gabriele grew up alongside his sibling named Doruntine. Other than the name of his sister, nothing remained public about his family — including the identity of his mother and father.

Admittedly, Gabriele’s upbringing and watching his family bond over food inspired him. Talking about his inspiration, he once said:

“I used to cook with my mum, absolutely. My mum – like many other Italian mum – cooked a lot! I used to join her in the kitchen all the time, although I had a much more clinical approach to cooking. The cooking my mum used to do is stamped in my head and I can’t replicate it. I thought a lot about why I wasn’t able to replicate it and realised that was because of the memories that are associated to the food.”

“I grew up in Italy, where the most important parts of the day are lunch and dinner. Old and new friends come together everyday [sic] around a table to share their stories, to create memories. I wanted to re-create that in the Valley.”

One of Gabriele’s biggest pet peeves is cheap knives.

By his admission, Gabriele traveled a lot as a child. Being exposed to different cultures and cuisines at a young, it fueled a desire for him to explore more and leave Italy.

While in Florence, Gabriele honed his culinary skills at the Buontalenti Institute of Culinary Arts and Management. Before his move to the US, he worked in several hotels and restaurants.

Once in America, Gabriele continued his studies and earned a BA in PR and Journalism. He also earned a BSc degree in Supply Chain Management and Logistics from Arizona State University.

Post-college, Gabriele served as a food critic for several Arizona-based publications. After 2011 though, he commenced working as a sales director at several New York- and Arizona-based agencies that operated in Italian hours.

Circa 2008, Gabriele had begun a premiere catering company called “il Tocco Food”. By 2020, it transformed into a successful brand operating in California and Arizona.

With his stint on “Say I Do,” Gabriele Bertaccini undoubtedly added several commas to his net worth.

Coming to his physical traits, Gabriele owned full sleeve tattoos on both arms. Also, he had a large ink on his left ribcage.

Judging by his IG posts, Gabriele hit the gym every chance he received. Or else how would one explain his ripped and fit physique.

Nothing in the manner he carried himself made people believe Gabriele Bertaccini was a gay man.

Regardless, Gabriele didn’t like sharing details about his girlfriend and their dating life.

As of July 2020, there didn’t exist suggesting Gabriele was a married man and thus didn’t have a wife.

More so than his lovers, Gabriele liked posing alongside his dogs for Instagram photos.

Along with Jeremiah Brent & Gabriele Bertaccini, Thai Nguyen made the 3-man team who ran the Netflix show...