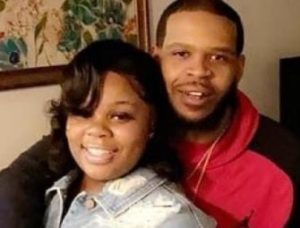 Kenneth Walker is the boyfriend of Breonna Taylor — the Louisville EMT gunned down by police in her own home.

Read about Kenneth Walker wiki in detail by tagging along. Furthermore, find out when the police released Kenneth and the charges pressed against him. Also, learn if Kenneth had a criminal history.

Kenneth was born circa 1993 to parents: Kenneth Walker Sr. (father) and Velicia Walker (mother). Sadly, info about his siblings remained a tight-knight affair.

In the arrest report, the police officers cited the Iroquois Park neighborhood as Kenneth’s address.

Growing up, Kenneth played football and was even a student-athlete at  Valley High School. For further education, he attended Western Kentucky University.

Coming to his physical traits, Kenneth stood beyond 6 feet in height. In the same vein, he owned over 89 kilograms of weight and sported a beard.

If not the fateful shooting on 13 March 2020, Kenneth would’ve started his job at the U.S. Postal Service. Previously, he had worked around two years for Coca Cola.

Up until the tragic shooting, Kenneth and Breonna had been dating for a long time. They were even planning a future together.

On 13th March 2020, three Louisville officers — Jonathan Mattingly, Myles Cosgrove, and Brett Hankinson — entered Breonna Taylor’s apartment. They were there with a warrant and looking for a suspect.

Unbeknownst to the officers, the drug suspect they were looking for was already in police custody. What’s more, the suspect lived someplace else.

Once the officers rammed barged into the apartment, Kenneth Walker drew his legally owned gun. He would eventually fire a shot that injured Mattingly on his leg.

The officers then let out 20 rounds in the apartment — eight of which pierced through Breonna’s body. She died on the floor of her hallway.

Lucky for Kenneth, he survived the ordeal without any injury. However, the Louisville PD registered two charges against him — namely: attempted murder of a police officer and aggravated assault.

Before the arrest, Kenneth didn’t have a criminal history. Even the arrest statement noted his clean record and mentioned he had legally acquired the gun.

As for the officers, the PD placed the trio in an administrative reassignment.

An outpouring of support for justice in Breonna’s murder case meant the authorities had to drop charges against Kenneth. In late-May 2020, Kenneth was released.

A GoFundMe campaign set upped by Kenneth’s relative for fighting against his wrongful arrest collected around $218 thousand by 8th June 2020.