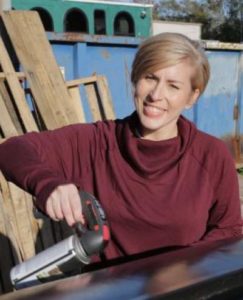 We all remember Erin Napier as the co-host of the American television series Home Town, also starring her husband Ben Napier.

The show premiered on HGTV in January 2016. And, ever since, the show’s fans saw the married couple restore Southern homes in Laurel, Mississippi.

The two continued to become a power couple even outside of the show after the show was renewed for the fourth time in January 2020. The highly acclaimed renovation program is scheduled for its next release sometime in 2021.

And, in the meantime, here is everything you may need to know about the former stationer, Erin Napier.

Erin and her brother, Clark, who is a doppelgänger for late actor Paul Walker, grew up in their hometown in Mississippi.

Clark is a Doctor of Physical Therapy and celebrated his 43rd birthday in February this year.

It looked like, the siblings had a very blessed upbringing. On 10th August in 2020, on the occasion of their parents’ 46th years of being together, Erin dedicated a beautiful Insta-message to them, which read:

“So thankful these two found each other and showed my brother and I what marriage and parenting should look like. Happy anniversary mama & daddy!”

Erin, before she got married was known by her maiden name i.e. Rasberry.

Also, her parents, are named Karen Clark Rasberry and Paul Rasberry. Karen, in addition to being the mother of two grown-ups, is an IPPY award-winning author and realtor in Laurel, Mississippi.

Further, regarding Erin’s education, she earned a bachelor’s in Graphic Design from the University of Mississippi.

When Erin was nineteen, she came to realize a mysterious illness– 24 hours of terrible stomach pain and a low-grade fever, and then it would disappear. She had multiple likewise episodes which only grew longer and severe. Eventually, after two exploratory surgeries, she was diagnosed with a perforated appendix.

So, Erin had her appendix removed and this was the ultimate farewell to over a decade-long ailment.

And now, standing 5 feet and 5 inches in height and flaunting her signature side-swept pixie hair cut, Erin’s health, both body and mind, appears to be in a much better state.

Erin Napier, an artist starting a career in Corporate Graphic Design, and her husband, Ben Napier a woodworker with a degree in History, embraces a mutual passion for renovating historic homes.

As newlyweds, Erin and Ben had bought and restored a 1925 Craftsman-style cottage. And today, they are involved in a local organization in Mississippi that is working to improve and grow the people and its community. Ben serves as president of the group, while Erin uses her graphic design skills to enhance their brand name.

Outside of their job as renovators, they operate a shop that sells heirloom wares and durable goods made in the U.S.A. The store is named ‘Laurel Mercantile Co. + Scotsman Co’.

This way, the entrepreneur couple, Erin & Ben Napier, is estimated to have pulled in a net worth of over $5 million.

Showing off her cute olive-colored overalls, she wrote, “If you’ve never felt the cool breeze of an industrial shop fan filling up your overalls, making you look like those people who parachute indoors, you ain’t lived”. She also mentioned that the outfit has been her uniform since the first day of COVID quarantine. To the picture, focused around her belly area, she clarified to the fans that it was not a pregnancy announcement. Teasingly, she continued to write,

“If that time comes, Instagram will be the last to know. 😘”

Erin welcomed her first daughter, Helen Napier together with the baby daddy Ben, circa January 2018. 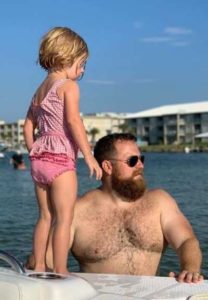 The couple met while they were students at Ole Miss and got married on 22nd November in 2008 when Erin was 23 and Ben was 25. Although we do not know when exactly the two started dating. 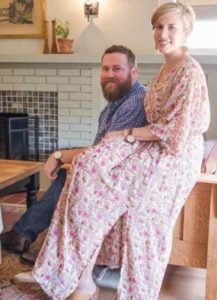 Erin Napier and Ben Napier are the owners of a merch store in Laurel, Mississippi (PIC: Ben’s IG)

While something very beautiful had happened when Ben asked Erin for marriage. A year before the wedding, a friend handed Erin a leather-bound book, at a bookstore and told her it was about college sweethearts. And soon after Erin read the book, she realized it was about her and Ben’s love story — written by Ben himself.

In April 2021, Ben and Erin revealed they were expecting their second child, another daughter. The couple also shared that their secondborn would arrive in May.

Erin gave birth to their second bundle of joy, another daughter, on 28th May 2021. She and Ben named their baby Mae Napier after her beloved Aunt Mae. According to PEOPLE, baby Mae weighed  7 lbs. 1 oz., and measured 19.5 inches.

Marketing, renovation, and fine woodworking expert Ben Napier is a common household name among those who are...