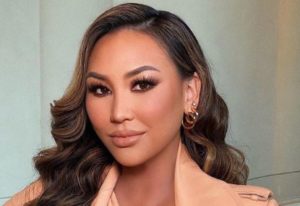 It’s been quite a while since we last saw the RichKids of Beverly Hills alum Dorothy Wang over Television. But miss her no more! On August 4, 2021, she was spotted filming season two of Netflix’s Bling Empire.

Update yourself on what you’ve missed over this Dorothy Wang Wiki.

Dorothy Wang first hinted about her appearance in Bling Empire by sharing IG footage of her alongside the show’s season one star Jaime Xie. Over the video, the two grabbed some goodies while shopping at Erewhon Market. “Back in our natural habitat,” Dorothy captioned.

Later, Dorothy further confirmed her new gig through another IG post captioned, “I have a secret, can you keep it? Forgot to take the stickers off my bag shh don’t tell.”

However, Netflix had yet to confirm her to be their cast as of early August 2021.

Dorothy Wang was born on January 27, 1988. That made her 33 years of old while she first hinted at her appearance on Bling Empire in 2021.

Corresponding to her birthday, Dorothy is of the Aquarius zodiac.

Dorothy Wang is the daughter of the Golden Eagle International real estate firm owner Roger Wang. He is a Chinese native who grew up in Taiwan and came to the U.S. in 1970 and built his billion-dollar empire.

As for Dorothy’s mother, she is Vivine Wang, a philanthropist. Though not much was known about her, Dorothy said that she was her “best friend”, and a “selfless queen who holds it down and makes the world go round.”

Overall, Dorothy’s parents were “cool” ones. But compared to western standards, they were strict. They might have been busy with their business but always made time to give Dorothy career advice.

Talking about Dorothy’s siblings, she has a sister named Janice Wang. She recalled that their parents would always include her and her sister “in everything” — meetings, dinners, or business trips.

Janice was married back in 2012 and three years later gave birth to baby Estelle. This also means Dorothy is already an aunt.

Dorothy Wang stands tall at a height of 5 feet 4 inches (162 cm). But she isn’t worried about her comparatively short height. Instead, she often took it to her socials to joke about it.

“That awkward moment when you realize your dress is actually meant to be worn as a vest…. #shortgirlswag”

Mentioning her distinct features, Dorothy has brown eyes, dark hair, and a triangular face. Also, she herself argued that she had “flawless” skin. But it wasn’t always like that. For a year of her life, Dorothy  “had really crazy allergic reactions,” until she went to detox and flush.

However, she kept her eponymous Youtube channel followers private.

The Straits Times dubbed Asian-American Kim Kardashian, Dorothy is a  self-described “funemployed” girl who first came to the limelight posting selfies on #richkidsofinstagram. She then stepped into showbiz and went on to work on several TV shows like Entertainment Tonight (2014), Rich Kids of Beverly Hills (2016), Steve Harvey (2016), and Fetch Me A Date (2019).

In light of her education, Dorothy graduated from the University of Southern California with a communications degree.

Did you know: Dorothy stands strongly against racism, especially against Asian hate. She even once shared a long caption over IG, a part of which wrote, “To my Asian community and our anti-racist allies, please join me today to speak up and stopasianhate!”

No, as of August 2021, Dorothy Wang isn’t married. Also, it didn’t seem like she was dating anyone at the moment. However, here is the list of all her former boyfriends.

In Nov 2012, Dorothy also shared a pic with a couple of boys captioned, “My boyfriend took me to my favorite restaurant tonight!” But we’re not sure if any of them were her boyfriend.

Besides this, Dorothy was always seen close to a male friend named Ezraj William. Just in case you’re confused, he is gay and her best friend.