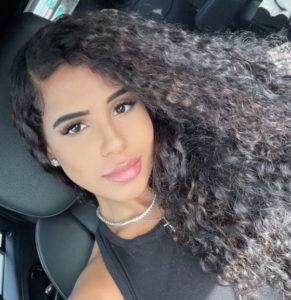 Dayanara Leon is the fiancee of Cuban boxer Yordenis Ugas who won against one of the best boxers in the world, Manny Pacquiao. During his win, the one who cheered the most was Dayanara who has been in a relationship with him for over two years.

Delve into this Yordenis Ugas Wiki to learn more about her age, relationship details, and plastic surgery.

Dayanara Leon and Yordenis Ugas have been dating each other since April 2019. Yordenis appeared on her socials for the first time on 25 December 2019. She wrote in her caption, “You realize that the years go by when at Christmas you don’t want gifts but people. 😏🎄 #teamugas”

Later on, Daynara cheered for her boyfriend for his fight night which was held at Beau Rivage Resort & Casino. “Fight Night!🥊🇨🇺 #teamUgas #TheWinningTeam #Shango #Obbatala,” she wrote on her socials.

Dayanara and Yordenis were making everyone jealous by flaunting their love for each other on valentine’s day. She claimed on some of the posts that she was his and nothing was going to change that. 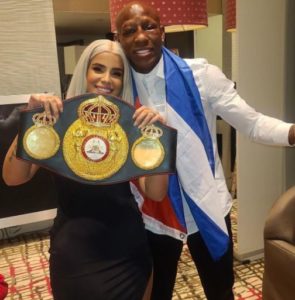 On 17 June 2020, the relationship took a huge step after, the boxer didn’t want to waste any time and proposed Dayanara. She showed off a huge dazzling engagement stone on her Instagram.

In the caption, Dayanara revealed that she said yes and made more commitment that she would never disappoint him and thanked her boyfriend for trusting her.

On 12 April 2021, Dayanara and her man celebrated their second anniversary. When Yordenis Ugas came victorious against Manny Pacquiao, she proudly celebrated her man’s victory. She was there before the fight holding his hands and after the fight with a belt on her hands which she flaunted on her Instagram.

During the fight, he was wearing a show with her name on it.

As a brief introduction about Yordenis, he is a professional Cuban boxer who was an amateur gold medalist at the 2005 World Championships and bronze at the 2008 Olympics, in the lightweight division.

Dayanara Leon celebrates her birthday every year on 4 December. She turned 20 years old in 2020.

On Twitter, Dayanara garnered 599 followers where she also tweeted 39 times as of this writing.

Dayanara Leon is of Hispanic ethnicity whereas she is Cuban by nationality.

Dayanara Leon Power was born to her mother Imilsys La Madrina and her anonymous father in Marianao, Cuba, United States.

Imilsys hailed from her hometown of Havana, Cuba, but lives in Quito, Ecuador. Dayanara is very close to her mom and remembers her on her birthday and mother’s day.

According to Imilsys’s Facebook, she has been in a relationship since 18 April 2016. But, she didn’t give away any details on her family members.

Not only Dayanara, but Imilsys also has an equally beautiful sister named Rubiah Power. She is an Instagram model with 42.1k followers and posted 656 posts in total. Similar to Dayanara, she is also very close to her mother.

While Rubiah posted only one pic of her father, and Dayanara posted, none suggested that Dayanara don’t seem to get along that much with their father.

Dayanara Leon stands tall to the height of over 5 feet 6 inches (1.67 meters). She, on her Instagram, shows off her stunning measurements of 35-25-38 inches.

Although Dayanara Leon might turn her head from the questions related to her getting plastic surgery, experts who have been working in the field claimed she got a few. She has at least got the breast implants and buttock implants which gave her the stunning measurements which made her more desirable.

Dayanara Leon’s estimated net worth should be under $100 thousand.

According to her Facebook, Dayanara Leon attended and graduated middle school from Conrado Duny. Later on, she enrolled at Hialeah Gardens High School for college education. She graduated highs school in 2017.

Though Dayanara never gave away details on her college education, she might be attending university for further study. But along with education, she is also pursuing a career to become an internet celebrity.

On her socials, Dayanara is gathering endorsement deals from several cosmetic and clothing brands. She also landed paid promotions from products which are contributing to her burgeoning net worth.