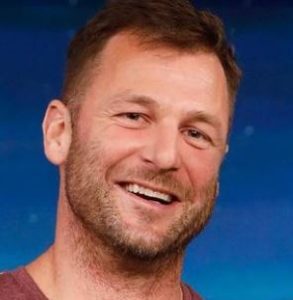 If you grew up with Discovery Channel in the 2000s, you must have come across Dave Salmoni. He was a staple of the channel’s wildlife shows like Animal Face-Off, Into the Lion’s Den, Sharks: Are They Hunting Us?, Rogue Nature, Into the Pride, etc. Also, he is Debra Salmoni’s husband.

If you are a Dave Salmoni fan, this article is a must-read. If you only know him but are not a big fan, read along. Maybe you’ll become one. And if you don’t even know who Debra Salmoni’s husband is, read along this Dave Salmoni biography to find out everything about him, including info on his family, his job, and his net worth.

How Old Is Dave Salmoni?

Dave Salmoni Family, Where Is He From?

Dave was from Sarnia, Ontario, Canada. And he was born in a family with successful parents. His mother was a coach for competitive figure skating. And his father was a chemical engineer. We do not know the names of his parents.

Dave has a sister, who was married in August 2009. We do not know her name either.

During a 2009 interview, Dave talked about his family’s support for his career.

“My family is pretty understanding. They know this is my passion. They came to see the first show I ever did that season at Wonderland. And they told me that they were glad that I love what I do, but that they never wanted to see it live again.”

No, Dave Salmoni is not vegan. He did once tried to transition to a vegetarian diet though. Unfortunately, his body did not “react well” to the change and he had to revert.

Dave Salmoni is a tall and broad and bulky guy. Once he described himself as a “big, 220-lb. bouncer guy”. He measures at a height of 6 ft 2 inches.

As of Aug 2021, Dave Salmoni was very popular on social media. He had a massive following on all three major social media platforms. His Instagram handle was @realdavesalmoni and it was a blue-tick profile with 56.4k followers.

Similarly, on this recognized Twitter handle, @davesalmoni, Dave had 98.3k followers. Dave was also present on Facebook and had both a regular profile and a page. On his blue-tick Facebook page, he had 70k followers.

Dave Salmoni is an animal trainer, a large-predator expert, and a Television personality. Growing up close to the wilderness in Canada, Dave is always interested in animals, especially big cats. He did not, however, considered animal training as his profession until he was 23 years of age.

Dave later went on to study zoology at Laurentian University in Sudbury, Ontario, Canada. He did his undergraduate thesis on Alaskan Black Bears. The next step was the job of an animal trainer at the Bowmanville Zoo in Ontario, where he was mentored by Michael Hackenberger.

While working at the zoo, Dave got a big opportunity to train two zoo-bred Bengal Tigers to rewild them. The effort was documented in the Discovery Channel documentary Living with Tigers. After that, Dave became a Discovery channel staple as a big-cat expert. He has either hosted or appeared in a total of 48 TV shows.

Apart from his Discovery Channel, Animal Planet, and National Geographic appearances, Dave was also a part of Jimmy Kimmel Live! from 2009 till his sacking in 2020. After numerous complaints from PETA (People for the Ethical Treatment of Animals) about Dave’s exploitation of Tigers for entertainment. Dave was accused of cuddling and playing with wild animals which are unnatural acts towards the wild animal.

Also, his show Into the Pride, in which Dave lived in a tent in the Erindi Private Game Preserve in Namibia and tried to “tame” the wild lions, was widely criticized by conservationists. Trying to “tame” wild lions and habituating them to humans was not only dangerous to humans but also very tormenting to the lions.

Dave’s history with Michael Hackenberger, who is a convicted animal abuser, also went against him. Ironically, Dave was one of the most popular faces in the world promoting the conversation of wild tigers.

Dave Salmoni is married to Debra Salmoni, an interior designer and TV star. She is the host of HGTV‘s reality show Vacation House Rules. And she was the owner and lead designer at the design firm Debra Lillian Design. The two of them started dating in 2013 and got engaged in the early parts of 2015.

Dave and Debra got married on 13 June 2015, when Debra was pregnant with their first kid. On their sixth wedding anniversary, Debra posted their wedding photo with the caption “6 years ago today we stood in front of our nearest + dearest and promised our lives to one another. At our favorite place, handwritten vows, and lots of tears.”

Their first kid, son Thomas was born only 2 months after the wedding. Their second kid, a daughter whose name we do not know, was born a couple of years later. The family lives in Toronto. 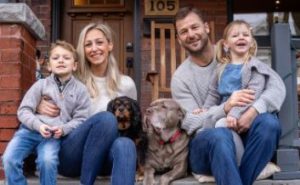