The theme of the show is such that — three couples, in each season, who agree to marry after the first-meet are paired up by relationship experts. The couples then spend their wedding night in a hotel before leaving for a honeymoon and upon returning home, they live together as a married couple for eight weeks. Consequently, they choose to either divorce or stay married.

Cortney, in the like manner, got married to Jason Carrion, a firefighter as well as a wrestler in March 2014. Keep reading — to know whether the strangers decided on staying husband-wife or chose to end their marriage.

All the while, also get to know Cortney, a bit more: her wiki, bio, family background, social media reach, and net worth.

So, it seemed, Cortney Hendrix found her happily-ever-after as she got engaged to Sherm — her boyfriend of more than a year.

On 6th March 2020, Sherm, who is an accountant by profession, got down on one knee and popped the question, during their trip to Boone, North Carolina. Before this, in December 2019, Sherm had asked for Cortney’s parents’ blessing — eventually working on a custom engagement ring. 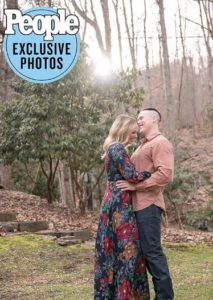 Cortney Hendrix and Shrem poses exclusively for People as they share getting engaged news on 19 March 2020 (Pic: Cortney’s IG)

Later, in March 2020, Cortney’s husband exclusively opened up to People about their marriage plans:

“One of the greatest qualities I see in Cortney is her commitment to the partnership marriage becomes. I’ve come to realize her ideal dream wedding is much more about marrying the right person and much less about the spectacle many modern weddings have become.

I couldn’t be happier or more excited to marry Cortney and start a family of our own.”

Previously, Sherm, who ended his prior marriage about six months before meeting Cortney, was “skeptical and reluctant to commit”.

In October 2020, Cortney finally married Sherm. She and her accountant husband shared the I Dos surrounded by 30 friends & family in North Carolina.

Cortney and Sherm tied the knot in a Peaky Blinders-themed wedding.

On the big day, Cortney donned — not one but — two Kiera Elise gowns.

Before the wedding, the guests took COVID tests and even self-quarantined.

Cortney Hendrix and former husband Jason Carrion had quietly filed for divorce in February 2019 following a six-month separation. As a result, their five-years of the wedding came to an end. Although they told at the time that they would “continue to love and support” one another.

During the time, in a statement to People, Jason had told:

“It is with a heart full of sadness that me and Cortney have decided to separate. Although we’ve decided to go our separate ways, we continue to love and support one another and still share a common goal to remain friends.”

Cortney Hendrix was born in Charlotte, North Carolina in 1987. She then relocated to Manhattan, New York.

A Virgo, as per her zodiac sign, she celebrates her birthday every year on 25th August.

Cortney Hendrix wasn’t her mother and father’s only child. She has a sister named Jeanine. No further details were confirmed on her parents and family life as of 2020.

As of mid-2020, Cortney Hendrix worked as an assistant manager of operations and marketing at Hendrix Business Systems in the Greater New York City Area.

Successful in both the creative and corporate worlds, she also operated as a freelance makeup artist in the film and television industry.

Further, as part of her job, she was involved as an on-air personality with the FYI network.

The former office manager at Teads.TV as well as Ebuzzing, Cortney Hendrix was reported to have made $1 million to $5 million in net worth.

Cortney’s measurements, on the other hand, remain hidden.