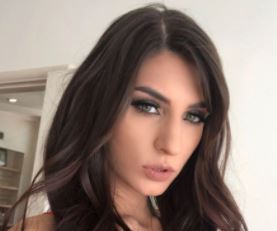 In March 2021, the adult-movie star and model Dana Wolf was in the spotlight for allegedly helping Bryce Hall cheat on Addison Rae.

Rumors had that, the TikTok star Bryce hooked up with Dana twice over the weekends in Vegas. However, the only proof then was the screenshot of the alleged text messages that was brought to the media’s attention by Keemstar.

So, who is Dana Wolf, who might just be the reason for Braddison’s split? Learn all about her as this wiki proceeds.

Dana Wolf was born on August 6, 1998. That made her 22 years of age as she was involved with the Braddison controversy in 2021.

As per her birthday, she is of the Leo zodiac.

Dana Wolf wanted to maintain the anonymity of her family. So, she never revealed her real name or theirs. However, we do know that Dana is of mixed Italian-Scandinavian descendent and was raised in her hometown Wisconsin. Reportedly, her grandmother passed away on September 13, 2019.

Furthermore, though Dana didn’t reveal much about her family, she shared that she loved them. Over a Tweet, she wrote,

Mentioning her distinct features, Dana has green eyes, long wavy brunette hair, and an enticing smile. Also, she has two tattoos — on the left forearm and the middle finger of the left hand.

As of March 2021, Dana entertained 84.5K followers over Instagram, and 81K followers over Twitter. Over her socials, she mostly flaunted her voluptuous body and flirty captions.

When she is not working in the movies, Dana spent her time over OnlyFans. Her bio wrote, “Your Virtual Girlfriend / Sexual Robot” and the subscription cost was $6.99 per month then.

Also, Dana prepared a “wish list” over Amazon where her fans could buy her gifts. The items she listed ranged anywhere from $5 to $100.

Trivia: Dana lost her virginity to a senior boy from her high school. At the time, she was interested in volleyball and was on the cheerleading team.

The drama all started when an alleged leaked text of Dana Wolf surfaced in March 2020 and Keemstar added fuel to the fire. According to him, he was reached out by someone who promised him information about Bryce’s alleged cheating. Over the received screenshot, Dana claimed to have hooked up with Bryce in Vegas.

In response to the matter, Bryce completely denied the accusations and also told Keemstar that he would be taking legal action against him. As for Bryce’s then-girlfriend Addison Rae, she remained silent about the whole thing. She once got caught by paparazzi where she looked annoyed and even shed tears when asked about the allegations.

If you didn’t know, Bryce and Addison had a brief breakup before. They were separated in early 2020 and patched up later in Nov 2020.

As of 2021, Dana Wolf didn’t have a husband. However, she seemed all prepared to take one. She revealed that her ideal husband would be a “Japanese businessman”.

Dana dreamed of one day moving to Tokyo, Japan, and living a happy life there.