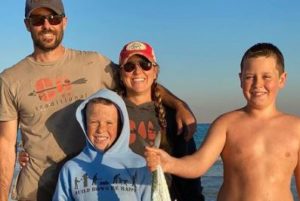 Finally, we have a survival winner, and he is non-other than the fans’ favorite Clay Hayes. The results for Alone season 8 were only published on August 19, 2021. although the filming of the survival show ended last fall.

Keep reading this Clay Hayes Wikipedia to find more about him.

Clay Hayes outlasted all of his competitors in Alone season 8 and bagged home the $500,000 top prize. During the competition, Clay lost over 18 kgs (40 lbs) in 74 days and despite his weakness was able to kill a young mule deer buck with his bow, forage wild mushrooms and berries, and occasionally catch fish.

Also, Clay was filmed having encounters with a mountain lion, grizzly bears, and a fisher

With the prize money, Clay revealed that he planned to pay off his house mortgage and set aside some for his kids to go to college. “Beyond that, I don’t really have any plans,” he added.

After returning victorious, Clay talked a little about his adventure and shared that there were times he was depressed (around 50 or something), but he pushed through it. As for why he always first ate the heart of his hunts, Clay revealed that there was no particular reason for it — “It’s just something that I’ve done forever.”

Also, he shared s about the moment he realized that he’d won.

“I had built up such a wall against expecting (to learn I’d won) that when it finally did come, it didn’t even make sense to me. What made me realize “Holy sh*t, I’m the winner, it’s over.”

Just in case you are new to the show, the theme was — the participants should outlast the other while videoing themself securing food and shelter.

This season, Clay was joined by other 9 contestants, each dropped off alone in remote wilderness with 10 hand-picked survival items.

Fun Fact: Clay’s first meal after returning from Alone was a double-decker cheeseburger, a cold IPA, and a cheesecake.

However, his birthday and zodiac were kept confidential.

Where Is Clay Hayes From?

Clay Hayes hails from Milton, Florida. But as of 2021, he resided in Kendrick, Idaho with his wife and beautiful kids.

Alone season 8 winner, Clay Hayes has his family and his birthplace to thank for teaching him the ways in the wild. Growing up in the rural pine woods, he honed his skills in hunting, fishing, and trapping while little. Though he didn’t talk much about his dad or siblings, he does attribute them to his success.

Also, Clay is grateful to his mother and often invited her over to his barn to join in on the fun. The last we saw her, she was making her first bow ever.

Here are some names of his known family members — Philip Hayes and Bill Hayes.

As of August 2021, Clay Hayes entertained 26.2K followers over Instagram @clayhayeshunter, and 6.1K followers over his Facebook page “Twisted Stave Media”. Also, his private FB account then had 1.9K followers.

His Job: What Does He Do For A Living?

You might have already guessed. But yes! Clay Hayes makes his living by crafting bows and filming the process. He is a wildlife biologist who first worked in work in some of the most remote and beautiful landscapes in the lower 48. But then, despite investing seven years of college and ten years in the job, he went on to follow his true passion, archery professionally in 2017.

In light of his education, Clay attended Pace High School, Pensacola Junior College, and the University of West Florida. Then he went on to study wildlife science at  Mississippi State University and graduated in 2007.

Clay Hayes garnered a net worth of under $1 million by 2021.

Just in case you are wondering, an average wildlife biologist in Idaho made around $58 thousand per annum.

Aside from his jobs, Clay also reeled in a few bucks from selling merch like t-shirts, and DVDs that cost anywhere from $25 to $35. Also, Clay has published a book called “Traditional archery hunting: stories and advice about traditional bowhunting” in 2014 that cost $6.95 on Amazon.

Fan also helped him through his Patreon account @clayhayes. The subscription charges were $5, $10, and $20 per month.

Clay Hayes has known his wife Elizabeth Shultz Hayes, ever since they were both 17. But it wasn’t until 2003, the duo went on from being lovers to husband-wife.

They recently celebrated their 18th anniversary on August 23.

Clay Hayes with his wife and kids (Source: Instagram)

As seen over the pictures, Clay was inspiring his kids to learn the fun of hunting.