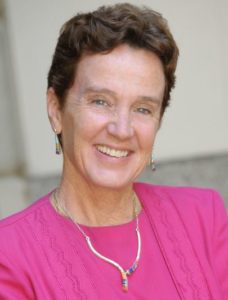 COVID-19 pandemic made everyone distressed around the world. The number of lives it has claimed all over the world were scaring citizens everywhere.

Though medical researchers were coming together to find the treatment of the disease, finding the solution was proving to be a formidable battle.

A little over 1000 deaths were reported in the United States as of 26 March 2020 at the time of penning this article. Thus, citizens began turning heads towards Anthony Fauci, the director of the National Institue of Allergy and Infectious Diseases, for his decades-long expertise.

And no one could understand the pressure that was exerted on Anthony more than his wife Christine Grady Fauci. She is also a successful clinical practitioner who has assisted her husband personally and professionally.

This wiki-style article focuses on the life of Christine Grady Fauci. Scroll down as the details on her personal and professional life unfold.

Christine Grady Fauci was born on 7 February 1952 in Livingston, New Jersey. She turned 68 years old while celebrating her birthday in 2020.

Being born in the states, she holds American nationality.

Livingston-native and mayor, John H Grady Jr. and his wife Barbara Grady had Christine Grady Fauci as one of their 5 children.

More on her family, Christine’s father John secured the mayor’s office two times in Livingston, New Jersey. He was Yale Graduate and US Navy veteran during the turmoil period of World War II.

Before he took the responsibility of public service in Livingston, John had built a successful career in the M&M Mars company. In 2013, he passed away living behind his family.

Getting into Christine Grady Fauci’s academic pursuit, in 1974, she earned a Bachelor’s degree in nursing and biology graduating from Georgetown University. Later on, she attended Boston College to get her masters in Nursing.

She had worked with mentally ill patients which fixated her purpose to dedicate herself to social welfare. Christine served with unscathed perseverance even during her pregnancy.

Putting her degrees to good use, Christine joined the National Institute of Health. During her enrollment, HIV/AIDS was claiming thousands of lives in America.

Correlating to her ethics, she focused on treating HIV positive patients while others were hesitant to do so.

Working along with multiple professionals, she witnessed the ill-behavior they were demonstrating towards AIDS patients. Uneased by the scenario, she went on to get her doctorate in philosophy and bioethics in 1993.

Besides her career in nursing, she also authored her self-published book The Search for an AIDS Vaccine: Ethical Issues in the Development and Testing of a Preventive HIV Vaccine.

Since 2012, Christine has been working in the Chief Department of Bioethics at the National Institue of Health Clinical Center.

Christine Grady Fauci is committed to Anthony Fauci since 1985.

The married-couple met each other while they were serving in Alagoas, Brazil at a Maryland-based non-profit named Project Hope. At that time, she was serving there as a nurse educator and manager of ambulatory care. 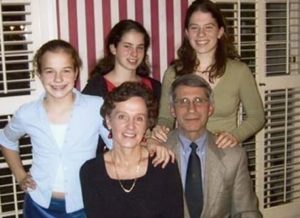 Christine and her family (Pic: Dailymail.co.uk)

Christine who was a self-taught Portuguese speaker with an informal lesson from her roommate. She was called for help as a translator while Anthony and a group of doctors were dealing with the native speaker.

The Brazilian patient who had Vasculitis and was not listening and following the orders of doctors. But while translating, she omitted the dis-obedience part of the patient to Anthony.

Late that day, Anthony called her to his office.

Christine assumed that he had certainly caught the misinterpretation and wanted to talk about that but her now-husband had different ideas. He was planning to ask her out on a date.

Eventually, the pair tied knots. They have three daughters: Jennifer, Megan, and Alison.

Even after 35 years of being together, the couple were growing as a unit professionally and personally.