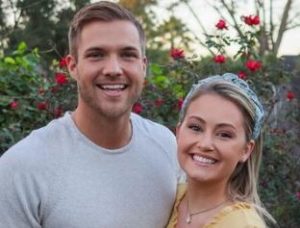 The Bachelor Nation first came to know of Christina Creedon as the girlfriend of Jordan Kimball. Later, she would become his fiancee.

So, who is she? Well, this Christina Creddon bio attempts to share info on her age, job, and height. Furthermore, it highlights her romance with Jordan.

In the summer of 2020, Christina Creedon turned 25 years old.

What’s more, Christina wakes up to birthday messages every 11th June. As such, she is a Gemini by birth.

As seen on her Instagram, Christina grew up alongside at least one sibling — a sister named Catherine.

Several years older than Christina, Catherine married her now-husband, Matthew Harris in November 2018. The Manor House at The Houstonian (located in Houston, TX) served as the location for the duo’s ceremony and reception.

Unsurprisingly, Christina was there to support her sister on her big day.

To mention her family members, Christina wished her grandpa a happy birthday in August 2017 on IG. Likewise, 3 months earlier, she had shared a photo of her mother.

Reportedly, Christina calls Texas her hometown. However, she had yet to shed light on her early life.

Possessing a beautiful smile, Christina Creedon stands beyond 5 feet 4 inches in height. Meanwhile, she should weigh under 53 kg.

Back in Oct 2016, Christina shared a photo of herself by the pool. It was her first Instagram post. By Dec 2020, she had garnered around 11.3 thousand followers on the platform.

Based in Florida in 2020, Christina Creedon was seeking a full-time job. A Certified K-6 Educator, she was — as noted on her LinkedIn — open to work as an early childhood educator.

Because Christina was relatively new to the scene, her finances couldn’t be ascertained. The same was the case with her net worth.

In November 2019, Jordan Kimball confirmed he was dating Christina Creedom via Instagram. Christina did the by labeling Jordan “my baby” on an IG post.

To those unfamiliar: Jordan Kimball competed for Becca Kufrin’s heart in the 2018 installment of The Bachelorette. He would also appear on 2 seasons of Bachelor In Paradise.

Before Christina, Jordan was engaged to Jenna Cooper. He and Jenna broke things off shortly after Bachelor In Paradise finale aired in 2018.

As for Christina and Jordan, they became an engaged couple in December 2020. Sharing a photo from their engagement, Christina called it “the best day of my life”. In a separate IG post, Christina expressed she couldn’t wait to start their family after the wedding.