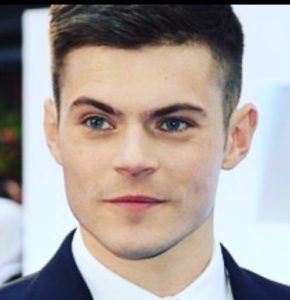 As Riverdale returned to our screen on January 20, 2021, not only did this new season wrap up the high school storyline and skipped seven years ahead but also brought some new cast members.

One of the newest addition to the cast of The CW drama emerging was British actor, Chris Mason, who is popular for his performances in Broadchurch and Little Liars: The Perfectionists. Chris plays Chad Gekko, Veronica’s (played by the incredible Camila Mendes) “controlling and jealous” husband.

More about the young actor’s role in The CW‘s Riverdale in the wiki-article below. Also, get insights into his general wikis, career, and married life.

Chris Mason was born on February 14, 1991, which made him age 29 as of January 2021. Ever since his birth, he’s been celebrating his birthday on Valentine’s Day, which is the 14th of February. According to his birthdate, his zodiac sign is Aquarius.

Though Chris Mason was born in Edge Hill, 11 miles far from Liverpool, he was raised by his parents in Broadgreen, Merseyside.

Chris Mason has a close relationship with all of his family members. His love for his dad and mom, who have been together since they were 14, is unparalleled. The actor guy also has one elder brother. Both of them went to St. Edwards for education.

Furthermore, Chris also keeps in touch with his grandfather, who turned 83 on September 12, 2017.

Until January 2021, Chris Mason stood tall at a height of 5 Feet 10 inches. Furthermore, he weighed around 80 kilograms. Meanwhile, his distinct features include blue eyes and brownish-black hair.

Chris has a massive social media reach. He can be found on all big social media platforms, including Instagram, Twitter, and Facebook. That being said, he is most active on Instagram, which also is the platform with the biggest following numbers.

The Liverpool native began his acting career at an age of 20. His first-ever work was on the TV mini-series called Justice. Chris played Peter in that TV miniseries.

The handsome actor worked hard for more than six years before people began to notice him through his performance in Broadchurch (2017). Appearing in 7 episodes of the third season of Broadchurch, Chris gained acclaim for his role of Le Humphries, one of the men involved in Trish Winterman’s horrifying sexual assault.

The English actor received rave reviews for his role of Nolan Hotchkiss in Pretty Little Liars: The Perfectionists (2019). His character Nolan Hotchkiss was a student at Beacon Heights University who was ruthlessly killed by someone with a vendetta.

After successfully receiving appraisals for Pretty Little Liars: The Perfectionists, Chris is set to impress every Riverdale fans in Episode 4, which will be live on February 10, 2020. His role, Chad Gekko, per The CW, is the “controlling and jealous” husband of Veronica.

Some other movie and TV credits of Chris include Dirty John, The Resident, The Honor List, The Fades, Vampire Academy, among others.

Although it has not been long since Chris Mason started his acting career, the talented actor has already made a heavy net worth of $700 thousand.

The Riverdale actor got married to the love of his life, Spencer Locke, on November 5, 2017. In case you don’t know who Spencer is, well like Chris, she is an actor. Spencer is known for her performances in Resident Evil: Extinction and Resident Evil: Afterlife as K-Mart and in Cougar Town as Kylie. She recently starred in Netflix’s American biopic Walk. Ride. Rodeo.

Though it is not known when the adorable couple met each other for the first time, they are believed to have started dating towards the end of 2015.

Chris and Spencer made their relationship official on Instagram by posting a series of pictures on their respective handles.

On November 14, 2016, Chris and his wife, Spencer got engaged. Chris took to Instagram to reveal their engagement. Posting an adorable picture of him and his fiancee with an engagement ring on her finger, he wrote, “Introducing my fiancé @spencerlocke 💙💛 so proud and so lucky!”

The incredible actor and actress got married in a large wedding ceremony in November 2017. Chris and Spencer celebrated their 1st marriage ceremony reminiscing their wedding day exactly one year before that date. 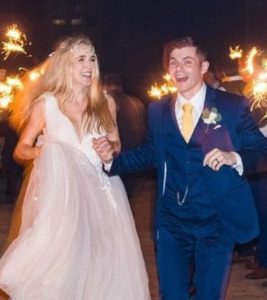 Chris and his wife Spencer get married.

The adorable married couple notified their fans about their upcoming kid in August through a unique and lovely video. On July 13, 2020, Chris announced the birth of their baby daughter, Monroe Mason, through his Instagram handle. 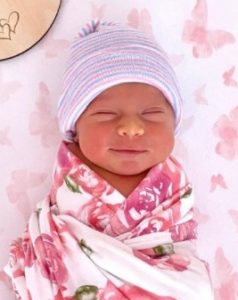 Chris announces the birth of their baby daughter.

He wrote, “A whole month early she just couldn’t wait to get here! Introducing Monroe Mason 👶 It’s been an amazing few days getting to know her. I am in awe of my wife @spencerlocke, this pregnancy has not been easy and she took on every obstacle gracefully with unwavering faith. I am forever in her debt for giving me the best gift ever” alongside a cute picture of his newly born daughter.