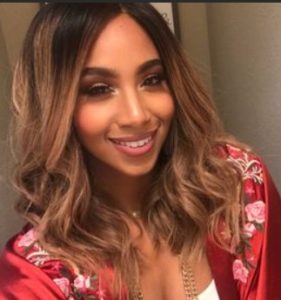 Rarely do we hear any stories of adopted dad being equally caring and kind as a biological dad. One of those rarest stories is the relationship between Carrington Franklin, an Instagram influencer, and her adoptive father Kirk Franklin, a Grammy Award-winning gospel singer.

Know how close are the creative director of Liz Kennedy Brand Management and her stepdad, Kirk, in the wiki-article below. Also, get insights into Carrington’s general wikis, career, and dating life.

According to famousbirthdays.com, Carrington celebrated her 30th birthday on May 13, 2020. May 13th birthday gives her Taurus as her zodiac sign.

Born in the United States, Carrington is the third child–the only adopted one–of famous gospel singer Kirk Franklin with his wife of more than two decades, Tammy Collins. Multitalented Carrington is the daughter of Tammy from her previous relationship.

Though any information about Carrington’s biological dad is unavailable on the Internet, it looks like Carrington is not on good terms with him if Twitter is anything to go by.

In almost every posts Carrington has made about her adoptive father, there is nothing but love and gratitude for the gospel singer.

For instance, in one of the tweets, she made on May 15, 2015, Carrington thanked Kirk for raising and loving her while slamming her biological dad for not standing up to her when she needed him the most.

In another tweet, Carrington wrote, “I thank God 4@kirkfranklin bc if it weren’t for him, I’d be bitter due to the lack of real men ie. my biological father, my brother & now u.”

Carrington has three siblings namely Kennedy, Caziah, and Kerrion. Kennedy and Caziah are her half-sisters and half-brother respectively whereas Kerrion is her step-brother.

Kerrion, Kirk’s child from his previous relationship, has been media’s attention in the past for his estranged relationship with his dad.

In June 2018, Kerrion shocked his fans and followers by claiming that his own father, Kirk Franklin, was trying to kill him.

While it’s already been more than two years since he posted the now-deleted tweet and Kerrion is very much in good health, his relationship with his dad still remains bitter.

Carrington possesses a massive social media reach since she is always active in her socials. As of March 2021, Carrington was available on Instagram, Facebook, and Twitter.

30-years-old Carrington stood at a height of 5 feet 5 inches and weighs no more than 63 kilograms.

Carrington’s first job was as an intern at KLTY Christian Radio. Then, she went on to work as an intern for Karmen Johnson & Associates until August 2010.

Her other jobs included Intern at Girl Scouts of Central Texas, Social Media/Marketing Manager at UT Arlington Continuing Education, Executive Assistant at Pat & Emmitt Smith Charities and Treasure You, and Event Coordinator at The University of Texas at Arlington.

Presently, Carrington is the CEO and Creative Director of Liz Kennedy Brand Management.

Her net worth was reported to be under $2 million as of March 2021.

Carrington knew her now-husband Maxx Nakwaasah from her high school times. They studied at the same school and probably began dating during that time.

The adorable couple got engaged on October 5, 2015. Carrington’s sweetheart bent down on one knee and proposed Baylor alum to spend the rest of his life with him.

Baylor alum married her college sweetheart Maxx on October 1, 2016, in a big wedding ceremony, where gospel legends Donnie McClurkin and Erica Campbell were also in attendance.

For the wedding ceremony, Carrington’s dad Kirk walked her down the aisle and officiated the wedding. 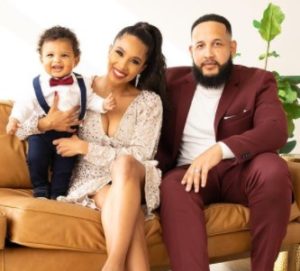 Carrington with her husband Maxx and baby son Shiloh during 2020 Christmas.

Furthermore, the Franklins were blessed with a baby boy, Shiloh Mekhi, in April 2020. Their kid has been featured on several of their social media posts.