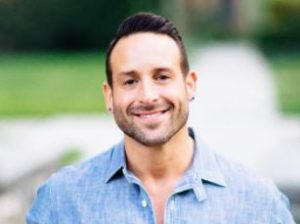 HGTV’s Inside Out star, Carmine Sabatella alongside his co-host Mike Pyle joined Rock the Block for its second season. Appointed as the judges, the duo offered their expertise to the two contestant teams who strived to completely transform identical three-story suburban properties within a month.

As per his birthday, Carmine is of the Aquarius zodiac.

Carmine Sabatella was born to parents Vera, and Ralph Sabatella. His mother Vera hails from Los Angeles, California, and was living a single life in Pasadena, California as of 2021. She has been the owner/president of Carmine’s Italian Arcadia for over 35 years.

Also, Vera never backed down from sharing her love for Carmine. She often took it to her socials to upload a picture with him and express how proud she was of him.

As for Carmine’s father Ralph, he passed away in June 2009 at the age of 64. He left the world 6 years after his father Angelo Sabatella.

Trivia: Vera celebrates her birthday on September 9, while Ralph celebrities his on March 22. The two were six years apart in age.

Talking about Carmine’s siblings, he has a brother named Tony Sabatella (who could also be his cousin).

Mentioning his distinct features, Carmine has a chiseled body, tattoos over his left hand and left torso, and wore ear tops.

Did you know: Carmine was hit by a car in late 2016, for which he had to go through multiple surgeries. It seems that that impact twisted his leg and ripped all of the fasciae off of his muscle. Although his bones were ok, the muscle just got destroyed. So, the doctors had to remove a total of about 1/2 of the muscle.

By April 2021, Carmine garnered 7K and 1K followers over Instagrams @realdesigncarmine and @csdomains respectively. Also, he 47 followers on his Twitter.

Talking about his career, Carmine first stepped into the restaurant business before he was found his love for interior design. He worked at his parent’s restaurant Carmine’s Italian Arcadia as a general manager for over 16 years. Then, he co-owned the Magnolia Resturant Group, Inc from 2005 to 2014.

Finally, he stepped into the real estate industry in 2014, joined Sotheby’s International Realty, and was working there ever since. Also, he ran his own real estate business, under the name of Sabatella Group.

As for his time on reality TV, HGTV’s Inside Out and Rock the Block was what put him on the map. But before that, Carmine also appeared on a few episodes of Bravo TV’s My Fab 40.

In light of his education, Carmine graduated from Arcadia High School in 1993. Then, he went on to join Pepperdine University, and later, studied Business and PR at USC.

Carmine Sabatella was formerly a straight married man, who had a wife and a daughter named Gianna Evangeline Sabatella. Now that his daughter is all grown up, Carmine recalled his adventures with her and said, “Being a father to this young lady has been the greatest gift for me.” Also, he tagged her as  “joyous, kind, loving, endearing, thoughtful, strong and an old soul.”

As of Feb 2021, Gianna was heading into her junior year.

Information on why Carmine and his wife divorced wasn’t shared.

Yes, Carmine Sabatella is gay. After splitting with his wife, Carmine fell in love with a co-worker from Compass named Ryan Delair. The two started dating at least in June 2015, got engaged in June 2016 on a family trip to Hawaii, and tied the knot on September 6, 2018.

Little info about Ryan: He is a Real Estate Agent/Salesperson, a model, and an actor. Apart from sharing a passion for homes, Carmine and Ryan both are fitness enthusiasts. No wonder, the two fell in love.