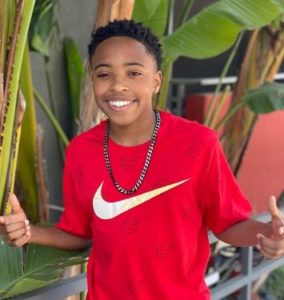 Dallas Young is an American actor who was best known for his work in Cousins for Life. He is a son and a brother of former major league baseball players. As the announcement for writing a new season for the hit TV show Cobra Kai was announced, he was introduced as one of the recurring cast in the show.

Delve into this Dallas Young Wikipedia to learn more about the actor, his parents and siblings, and his career as an actor.

Dallas Young was born on 25 October 2006. Furthermore, he turned 14 years old while celebrating his birthday in October of 2020. Per that information, he secured Scorpio as his zodiac sign.

His father, Eric was a former American Major League Baseball second baseman and left fielder. While in Rutgers University, he played college football and college baseball.

On several platforms, it was pointed out that Dallas Young’s parents were separated. However, it hasn’t been confirmed yet.

Nevertheless, Dallas is very close to both of his parents. They regularly feature on Dallas’s social media posts.

As for his siblings; Dallas Young has at least one brother from his father’s previous relationship named Eric Young Jr. Following the footsteps of his father, Eric Jr. also established himself as a baseball player for Acereros de Monclova. He was a former Anaheim Angels outfielder.

Whereas, Dallas appears to be the only child of his parents.

Dallas Young is getting bigger so he is attaining physical growth. At 14, he stands tall at 5 feet (1.52 meters) and growing.

Dallas discovered his love for acting at the age of nine. Since then there is no stopping him from turning the art form into his career. But, more importantly, he living his father’s dream to become a successful actor.

Eric Sr. had always advised his kids: “Whatever you do, make sure you love it.” The baseball coach shared in an interview: He’s so mature and humble and he understands what hard work can do for you. You can tell that he loves it. Dallas loves acting.”

Dallas spoke to CELEB MIX in an interview where he shared: “Acting just fell into my lap. I was playing with my cousins and got an anonymous phone call inviting me to a casting call in LA. From that, I got a manager and agent and discovered my passion for acting.”

On the other side of the phone was Diana Horner. He is represented by Osbrink Talent Agency.

Dallas also shared that he would love to do a movie with Denzel Washington or Will Smith where he played their child and go on adventures with them.

In the 5 year span of getting into acting, Dallas has built quite an impressive resume. He earned twenty acting credits in total. Some of his notable work to date are The Good Place, Shameless, Cobra Kai, The Fosters, Mixed-ish, and a few others.

Dallas Young is starring in season 4 of the acclaimed series Cobra Kai. While the show revolves around the rivalry between focuses on Daniel LaRusso (Ralph Macchio) and his rival with Johnny Lawrence (William “Billy” Zabka), the show has quite a few other characters and he is one of the recurring ones who will debut in the new season.

The Houston-based actor Dallas is playing the role of Kenny. The character who seemingly joins one of the dojos in the Valley during the fourth season will be an important factor in season 4, in Cobra Kai Kid YouTube channel. He also noted that his character and he have athletic ability in common.

Is Dallas Young Dating Anyone?

No, Dallas Young is single. There are no tale-tell signs that speak for his possible romantic life. But, he is at the age where he gets to experience his first love. But, there are no details on him having a girlfriend.