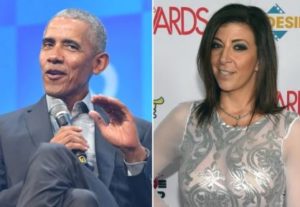 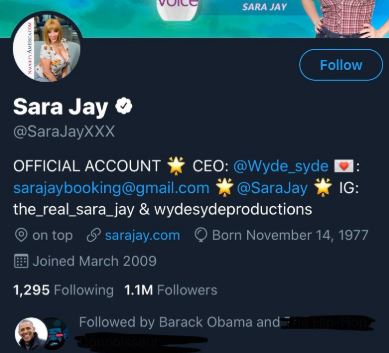 Within hours, Sara began trending on Twitter. In turn, it prompted many to crack jokes at Barrack’s expense.

Another Twitterati named @channellikeatum added, “Barack and I are on the SAME WAVE. Sara Jay really the (GOAT).”

Posting a meme of Stephen A Smith dancing, @_soccergoals captioned it, “President Obama on his way to fap with Sara jay video for the 344th time.”

Tweeting a GIF of the former first lady snatching photo from Barack’s hand, @DonnyNewYork quipped “Michelle’s about to do MORE than snatching Barack Obama phone. He’s finna be IN TROUBLE. He better unfollow Sara Jay.”

As fan can recall, Barack penned a short but sweet message for Michelle’s 56th birthday. Sharing a photo-booth-like snaps via Instagram, he called the mother of his daughters the star in every scene.