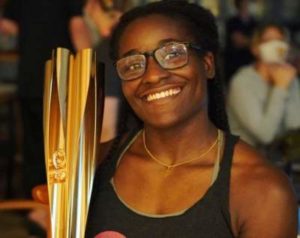 On August 3, 2021, Tamra Mensah-Stock became the first Black woman in Olympics history to ever win the gold. Defeating Nigeria’s Blessing Oborududu in the women’s 68-kilogram freestyle wrestling final, the American athlete also became the second American woman to achieve the medal after Helen Maroulis brought home the gold during the 2016 Rio Games.

Best wishes were thus pouring in and UFC President Dana White was among those congratulating her.

And so, amid the new realm of massive fame, her old-new fans wanted to know more about her gender, parents, and married life-related stories.

Tamyra Mensah-Stock Gender: Is She A Man?

Tamyra Mensah-Stock clearly writes her gender as ‘female’ on her Facebook basic info. Thus, the Olympian isn’t a man.

Tamyra grew up in her hometown of Katy, Texas. Her family moved had moved there, after she was born in Chicago.

Her parents are no longer together. Not because they separated but because her father, Prince Mensah, died in a tragic car accident in Louisiana on Jan. 1, 2009, during Tamyra’s first wrestling season. After driving in to watch his daughters wrestle one weekend, he had fallen asleep at the wheel on the way home.

This was the cause why angry and hurt Tamyra originally blamed wrestling for her father’s death. But, because her father loved that his daughters wrestled, Tamyra soon found peace with wrestling. “He would’ve been the loudest one here. He would be so proud. He would be so happy”, Tamyra said following her win in the Olympics 2020.

Her father grew up in Ghana and came to America when he was 30. Their he met Tamyra’s mother Shonda, a native of Chicago.

Tamyra is just as much proud of her mother. She said, her “mommy” is such a blessing in her life. Tamyra explained, she is just like most mothers but is “something else and a bag of chips” and she loves her for it.

“I wouldn’t be the woman I am today if God hadn’t sent me to her.”

Does Tamyra Mensah-Stock Have A Twin?

Yes, Tamyra Mensah-Stock has a twin sister and a fraternal one. Her name is Tarkyia Mensah. Both the sisters attended Wayland college. And it was Tarkiya who introduced Tamyra to the sport in high school when their mother demanded the girls, “do something with themselves.”

And Tarkiya did not want to compete in a regular sport, a friend had suggested wrestling.

Tarkiya eventually earned two state championships and soon Tamyra too followed in her footsteps, and the rest is in history.

Until Aug. 4, 2021, Tamyra Mensah-Stock, seemed to be on TikTok. She often shared glimpses of her TikTok videos on her Instagram. But, at this point, her TikTok @mensahtamyrastock was not reachable for some reason.

Meanwhile, Tamyra had 75.4K followers on her Instagram @mensahtamyrastock.

Other than that, Tamyra also, religiously, featured on Maya G Nelson’s and Team USA’s TikTok.

Tamyra Mensah-Stock had above an estimated $1 million net worth before August 2021.

Tamyra, who has been an athlete at USA Wrestling since 2014, joined the Parity Now Community hinting even she faced a pay gap between genders sometimes.

Teaming up with fellow professional female athletes and the company that sees her value-and actually pays her for it, she shared, “my mother and her mother have worked their butts off to get to this point in time. To watch me not only succeed but excel.”

Since June 2013, Tamyra is also in affiliation with Titan Mercury Wrestling.

She then went to Wayland Baptist University from 2010 – 2018 and all along pursued her sports career. Also, in between, Tamyra worked in the sales at DICK’S Sporting Goods and as an inventory auditor at Plato’s Closet.

Tamyra Mensah-Stock got married to her husband, Jacob Stock on July 26, 2016.

Jacob, being a fine wrestler in his own right at Morton Ranch, is Tamyra’s biggest supporter. 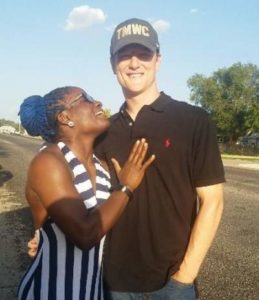 Tamyra Mensah-Stock with her husband, Jacob Stock on their first anniversary of marriage (PIC: Tamyra’s FB)

Jacob, like Tamyra, was also a good prep wrestler at Morton Ranch High School. And he was Tamyra one of the bigger reasons for choosing Wayland Baptist University.

Tamyra: “He was someone on the wrestling team I admired. He was this tall handsome guy, who I didn’t think would ever want to talk to me. He was my super crush. When I found out he had signed with Wayland, I also signed … and we started dating our junior year of college.”

Tamyra shared, Jacob is in her ear every day and telling her she can do this and that. So, with him and his positivity, Tamyra said, “It’s still a struggle but I’ve gotten better since the beginning of my wrestling career.”

When Tamyra is not wrestling, she is at home in Colorado Springs, with her husband Jacob Stock and their dogs Lula (left) and Otis.

Tamyra said she also would like to become a mother and create a home when her career is much less hectic.

“The fact that I have to leave my husband and dogs has been tough. My coaches tell me I can have a baby and continue wrestling. I don’t want to do that. I want all my attention to be on a little one’s life. I want to show (my kids) that you can have your dream, then focus on creating the future of the world.”

After getting married, Tamyra decided to hyphenate her last name, to Mensah-Stock, to honor and keep a part of her father with her.