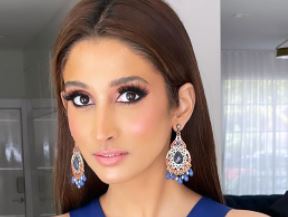 We’ve waited over a year for the Family Karma season 2, and guess the wait was worth it after all. The show’s star, Anisha Ramakrishna is still keeping reality TV real and opened up about her aberrations from the show’s season one. From ending up her 12-year relationship to freezing her eggs, Anisha didn’t seem shy about either.

But what has she been doing off-screen lately? Let’s talk all about her increased net worth and new boyfriend prospects as this Anisha Ramakrishna wiki proceeds.

Anisha Ramakrishna was born on September 22, 1984. That made her 36 years of age as she appeared on the season installment of Family Karma in 2021.

Corresponding to her birthday, Anisha is of the Virgo zodiac.

If you have been following Family Karma, Anisha Ramakrishna’s parents are surely no new faces to you. Her dad Ram and especially her mother Chitra Ramakrishna are part of spices that made the show even more interesting.

Back in season 1, it was her mom’s view that ended up reinforcing Anisha’s decision to freeze her eggs. However, at first, Chitra didn’t want to talk about it and said that she was “confused” by the whole process. But unlike Chitra, Anisha’s aunties asked her to freeze her eggs over four years ago.

When the mother-daughter duo wasn’t on the show, the two were spotted over Anisha’s Youtube doing make-up or anything fun together.

Talking about Anisha’s dad, Ram turned 67 on July 10, 2020. His recipe for making coffee was featured over Anisha’s Youtube, and she also claimed that she was a spitting image of him (physically).

Overall, Anisha mentioned that her parents were ideal ones. They have” sacrificed so much” for their children just to make sure that they have “everything they want and need.”

Trivia: Anisha’s grandfather put his first vote as a US citizen, only after turning 88 on October 26, 2020.

Well, we won’t be far off the mark if we say Anisha Ramakrishna is Tamil. Her family hails from the south of India, in a city between Kerela and Tamilnadu called Palakkad.

But it wasn’t just Anisha who inherited the Tamil roots. Her brother Vikram Sairam, and sister Nandini Ramakrishna are around proud to be from south India.

The 5 feet 8 inches (172 cm) tall, Anisha Ramakrishna gained 13kg (30 lbs) after her split with her long-term boyfriend, Vishnu. Moreover, she even chopped her beautiful hair off then.

Well, now that the Family Karma season 2 is here, Anisha has started to take care of herself. Back to long hair and a noticeable weight loss, she admitted to having come back more “mature” and with a “great glow up”.

Anisha Ramakrishna garnered a net worth of over $1 million by 2021.

She is a reality star featured over Family Karma season 1 for 8 episodes and on the show’s season 2 for two and counting. During season 2, Anisha also was joined by her childhood friend Dillon Patel as well.

When she is not filming on Family Karma, Anisha was busy with her clothing line called Currently. They claimed to be committed to designing dresses that represented the diversity of female body shapes.

Also, she weekly uploaded a podcast over Apple Podcast at the time.

Before Anisha joined the reality show, she was worked as a vice prescient of Tahair, ASL for over 6 years. She has also been a senior brand manager for L & T Fashion for almost 3 years.

In light of her education, Anisha attended Florida International University from 2003 to 2005 and went on to complete her master’s from the University of Miami Herbert Business School in 2009.

Anisha Ramakrishna broke up with her 12-year-long boyfriend, Vishnu on Family Karma season 1. It was also the time when she moved back to her family and followed in their entrepreneurial footstep.

But over the season, Anisha’s family often bought up her ex-boyfriend over their conversation; and naturally, fans would be hopeful of their reunion.

Sadly, that doesn’t seem to be the case. As of 2021, there was no mention of Vishnu on Anisha’s socials, which could only mean that the two have gone their separate ways for good.

As for her new boyfriend, Anisha didn’t seem like she had one (before May 2021). Although her family often puts pressure on Anisha to get married, and ironically, she pretends to be annoyed by their comments, the truth is that she does want to have her own family someday.

Did you know: Anisha was a celibate for three years as the show’s season 2 premiered in 2021. It was partially by choice, and also partially due to the COVID-19 pandemic in 2020.