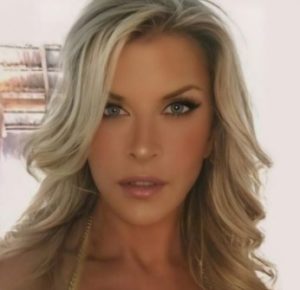 Allison Dunbar is an American actress, who got her long-deserved attention very late in her career. She is popular for the performances she put in movies and TV shows like StartUp, Quick Draw, and 2 Broke Girls.

Allison caught the attention of the media after she was spotted kissing the Golden Globe award-winning actor Ron Perlman outside a Pasadena restaurant on May 15, 2019.

This article is gonna explore the life of Allison. From her general wikis to net worth–this article has it all. You may also get insights on where will Allison and Ron be heading in their relationship now that Ron has already divorced his wife, Opal.

The actress, burlesque dancer, and swimsuit model Allison Dunbar was born in 1972, which made her age, as of October 2020, was only 48.

Ever since she was born, she’s been celebrating her birthday on the 31st of July. Going by her birthday, her zodiac sign is Leo.

Allison Dunbar was born in a family of four. She was born and raised by her parents in her hometown in Delaware. Her dad’s name is Timothy Barron and her mom’s name is Wendy Barron.

Though Allison’s family originally hails from Ontario, Canada, they have been living in Pennsylvania for a long time now. Allison’s mom worked as a dean of Villanova University School of Law whereas her dad retired as a deputy attorney general in Delaware.

Allison was really close to her uncle, Norman Barron, who died of cancer in 2018. He served as a chief deputy attorney general for the Delaware state.

Allison also has a brother as her only sibling. He is a married man. Currently, he resides in Annandale, Virginia with his kids and wife, Tracy.

Coming to her physical attributes, Allison Dunbar stands at an average height of 5 feet 8 inches. Furthermore, her weight is around 63 kilograms and her body is composed of medium built. She boasts appealing body measurements of 37-26-36 inches.

To speak the truth, Allison’s social media reach was below average before she was linked to Hellboy actor Ron Perlman. But, the fame that came with her association with Ron has given a huge boost to her Instagram following.

Allison went to St. Mark’s High School located in Milltown, Delaware. Upon the completion of her high school, she moved to New York to study acting.

Later, Allison relocated to Los Angeles to pursue her acting career. However, she did not have an easy time finding her breakthrough role.

One of the earliest breaks she had was on the Comedy Central’s Strip Mall. She also played Nicole Lupertazzi for a total of four episodes in the award-winning TV show The Sopranos.

Post her appearance in The Sopranos, Allison also appeared in Criminal Minds, CSI, Drake & Josh, 2 Broke Girls. However, none of the roles she did gave her the attention she deserved.

It was after several failures that Allison’s dream to join the comedy improv troupe, The Groundlings, got fulfilled. The Groundlings gave birth to the rise of stars like Maya Rudolph, Lisa Kudrow, Jimmy Fallon, Conan O’ Brien, among others.

After her association with The Groundlings, Allison went on to land roles in big TV shows like Modern Family, Crazy Ex-Girlfriend, and Yellowstone.

She worked alongside her now-boyfriend Ron Perlman in 2018’s Sony Crackle show StartUp.

Allison Dunar gathered a huge net worth of at least $650 thousand working as a burlesque dancer as well. She regularly dances at Santa Monica’s Harvelles. Furthermore, Allison is the creator of the burlesque show Smokeshow.

Allison Dunbar was married to her Canadian NHL defenseman husband, Sean O’ Donnell, for two years. She first met Sean in 1998, while he was playing for the Los Angeles Kings.

The pair dated for almost 3 years before taking it to the next level. They tied the nuptial knot in 2011 in a wedding ceremony with limited people in attendance.

However, things did not work out for Allison and her husband as they divorced in 2003. Sean married Laura Marie Buka in 2009 whereas Allison briefly dated a man named Kyle.

After a long time, Allison Dunbar came into the media after she was spotted kissing Ron Perlman in May 2019. The pair first met in the set of StartUp, at SoHo House in West Hollywood.

Allison faced major backlashes on social media after Ron separated with his wife, Opal, shortly after they were caught kissing. Some people even accused her of being a “homewrecker.”

Ron and Allison went for a vacation in Mexico shortly after Ron filed for divorce with Opal in November 2019. 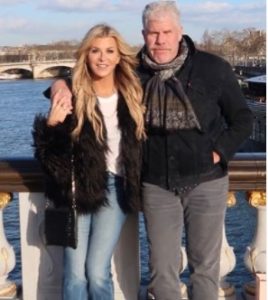 Allison and Ron vacationing in Paris.

On October 29, 2020, the adorable couple also went for a vacation in Paris. Allison wrote, “Paris in the year BC,” on her Instagram handle posting a photo of the duo.