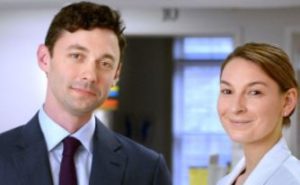 Meet Alisha Kramer, popular as wife to the Democrat Jon Ossoff who was all set to replace the Republican Senator David Perdue in 2021.

Already claiming his victory, Jon took it to his social media with a “thank you” speech, and besides his well-wishers and supporters, Jon didn’t forget to thank his wife for all her hard work. He praised Alisha for her contribution to the healthcare system as Jon himself had vowed to improve health facilities and scale down the  COVID-19 impact.

So, who is the future senator’s praiseworthy wife? Learn all about her as this Alisha Kramer wiki proceeds.

Alisha Kramer was born on February 1, 1990. That made her 30 years of age in 2021; three years younger than her husband Jon Ossoff.

Corresponding to her birthday, Alisha is of the Aquarius zodiac.

Not much was shared about Alisha Kramer’s parents and siblings. All that’s know was that she comes from a Jewish family, the same as Jon’s. If you didn’t know,  Jon’s father’s parents fled pogroms in Eastern Europe, while his mother moved to the US. However, Jon’s mother wasn’t Jewish. Thus, he had to formally convert before his bar mitzvah.

As for her hometown, Alisha, like Jon, was born and raised in Atlanta, Georgia.

Her favorite pastime activity was to “stay active, read, write, cook, and spend time with family and friends.”

It seemed like Alisha like to remain private about herself. While her husband Jon amassed over 409K followers on Instagram, Alisha had yet to join the social media life.

Alisha Kramer was an Obstetrics and gynecology medical resident. In 2020, amidst the COVID-19 pandemic, she was working mostly delivering babies in the Georgia hospital. She even contracted the coronavirus in doing so, but fortunately soon got back on her feet. For her work then, Alisha was even featured in a CSIS podcast.

Before that, Alisha had a job as a program manager and research assistant at the Center for Strategic and International Studies (CSIS) from 2012 to 2014. Also, she worked as a research assistant in an Immunology lab at Georgetown University from 2009 to 2011.

As for her view regarding abortion, Alisha believed in women’s right to abort. She even used her voice before the Georgia State Senate alongside fellow gynecologist Preetha Nandi and spoke against Georgia’s “heartbeat” bill.

In 2021, Alisha Kramer’s net worth was over $500 thousand. In case you’re curious, a medical resident in Atlanta, Georgia made around $52 thousand per annum then.

For education, Alisha attended Georgetown University from 2008 to 2012 for her Bachelor of Science, Biology of Global Health degree. Then, she enrolled at Emory University School of Medicine from 2014 to 2018 for her Doctor of Medicine degree. Also, she went to the Danish Institute for Study Aborad in 2010.

Alisha Kramer and Jon Ossoff are the lucky ones. They first met during their high school days at Paideia School in Atlanta, Georgia, and most likely started dating when Alisha was a freshman and Jon was in the senior class.

After 12 long years of dating in 2017, Jon finally popped the question and asked Alisha to marry him. Their wedding followed a year later in September 2018 and they were going strong as of 2021.

The duo could often be seen over Jon’s IG, with just a selfie or with videos of making pies and answering questions. Also, Jon, as proud as he was of his wife’s job, featured Alisha a few items over his Twitter sharing her health messages.

Likewise, Alisha was supportive of Jon. She has lent her expertise to Ossoff’s campaign, countless number of times. Collaborating with him over Facebook live chats and the fact that Alisha’s a dedicated health worker, factored majorly for Jon’s win.