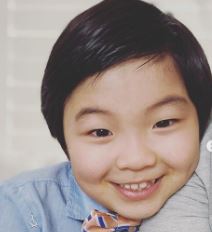 The adorable child actor, Alan Kim won the 2021 Critics’ Choice Award for best young actor/actress for his performance as David in Minari (2020). Over the American drama, Alan portrays one of the children born to a Korean-American family who move to a farm in Arkansas to live the American dream.

Keep reading this Alan Kim Wikipedia to learn all about him.

Alan Kim stated his acceptance speech like many others, listing off names, and thanking the critics and his family. But as he was reciting the names, he couldn’t hold back his tears and broke down. He continued,

Moreover, he powered through the rest of his acknowledgments, which even made his fans cry. We could see his Twitter tags filled with tweets from all over the world about how he made their “heart explode.”

Alan Kim was only 8 years of age when he won the Critics’ Choice Award in 2021. He celebrates his birthday on April 24 and is of the Taurus zodiac.

Alan Kim was born to parents Ethan Gyojoong and Vicky J. Kim. They were married on September 4, 2004.

His father, Ethan was a software engineer working for StubHub for over 4 years in 2021. Reportedly, he was into web applications development for over 17 years and has worked with companies like GE Digital, Western Digital, Hearthware Inc., Shinhan Card Co., Neowiz Corporation, and many more. In light of his education, he completed his bachelor’s from Korea Advanced Institute of Science and Technology and did his master’s from Illinois Institute of Technology.

As for his mother Vicky, not much was known about her, except for the fact that she called herself a “Cream mom” and she lived in Mountain View, California. Also, it was Vicky who penned Alan’s IMDB profile.

Just in case you are here looking for Ethan’s onscreen parents from Minari (2020), they are named Steven Yeun, and Han Yeri.

Also, Alan has a talented sibling named Alyssa Kim. She is an actress and a singer who has roled as “Penny” in 101 Dalmatians (2016), “Naka” in The Lion King Jr., Gretl in The Sound of Music (2018), and various other musicals. In 2021, she was associated with the FROZEN Broadway National Tour(OTC) as Young Elsa. 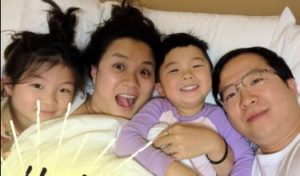 Alan Kim with his parents and sister (Source: Facebook)

Talking about his ethnicity, Alan is Korean-American. His dad hails from Daegu, Korea, and later moved to the US. Also, Alan wore a traditional Koreana attire for the New Year 2021, flaunting his Korean heritage.

Did you know: Alan has a middle name that starts with “S”. Also, “Scaring people” was his favorite kind of prank.

Alan Kim stood tall at a height under 5 feet (152 cm) as of 2021. We are sure that this little man will grow taller and handsome.

By March 2021, Alan gathered over 12K followers over his Instagram. His posts were filled with his cuteness and a few of his movie promotions.

While Alan Kim was honored for his outstanding performance in Minari (2020), it wasn’t his only movie where we will find him. As of 2021, he was all set to be cast in the movie Latchkey Kids alongside Elsie Fisher.

Reportedly, the John J. Budion directed movie will follow “Shae who befriends an eccentric teenage girl looking to escape the troubling life her mother has created for her, all the while the local enforcement believe the boy might be offing his babysitters.”

In an interview, Alan shared that he is looking forward to doing a lot of movies but excluding romantic movies. Also, he shared that he was watching Sonic the Hedgehog, and Harry Potter then.

Apart from movies, Alan’s favorite thing to do was riding a bike and making something creative in his free time. Also, he practiced Taekwondo and wore a purple belt in early 2021.

Talking about his school, he was in second grade then and his favorite subjects were Math and Science.