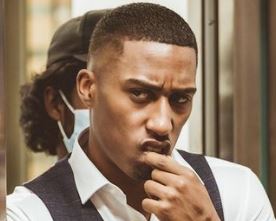 Normally, the stars get canceled when the internet on their case. But not this time! The YouTuber, Yung Filly trended on Twitter after two TikTok users (Emily Hobbs, and Jade Martin) called him out for blocking them on social media after allegedly sleeping with them.

However, the internet slammed the accusers instead, labeling them as clout chasers, also refusing to believe that Yung would be linked to them.

Keep reading this Yung Filly Wikipedia to learn all about the YouTuber’s personal life.

Corresponding to his birthday, Yung is of the Leo zodiac.

Yung Filly’s real name is Andres Felipé Barrientos. He was born in Cali, Colombia, which gives us a hint about his parents’ nationality. Also, in one of his videos, he revealed that his dad and mom were from Colombia. However, his family later moved to South East London, England, where Yung spent most of his childhood.

Furthermore, Yung once featured his “Colombian-looking” mother over his IG on her birthday (October 28, 2020). Over the caption, he mentioned that she was the reason he did what he did! and also shed light on her hardships raising Yung and his younger sister.

Trivia: Fans mentioned that Yung’s sister was funnier than him.

As for Yung’s father, he just shared that he was close to his mom than his dad.

Confused about Yung’s nationality, many often ask him if he was a Somali. But he is Colombian, people.

Apart from English, Yung is also well versed in Spanish. On his single “Hold”, Yung sang the first part of his verse in Spanish.

Mentioning his district features, Yung has a long triangular face, brown eyes, and loved to keep his hair short and wavy.

Also, Yung was present over Twitch with 4.5K followers.

Yung Filly’s net worth was above $2 million in 2021. His Youtube earning was estimated to be around $5K – $79.7K yearly then. Also, he was available on Cameo where he charged $5.99 for direct messages.

The hilarious Youtuber, Yung was also part of the U.K.-based comedy group The Wall of Comedy. The group had many popular videos such as “South London Girls,” which was viewed millions of times.

Apart from being a Youtuber, Yung is also a talented musician. Check out his music over Spotify like Hold, Clean Up, Confidence, Again, Mucho Mas, La Paila, and Take Time.

After 2020, Yung has stepped into the TV world as well. He has appeared on shows like Don’t Scream, Celebrity Mastermind, Hot Property, Don’t Hate the Playaz, G2: Making the Squad – FIFA 21 Edition, and Dating No Filter.

Also, Yung was a part of the charity show Soccer Aid 2020 alongside his best friend Chunkz. The two played for the England team and reportedly, raised over £11,000,000 for Unicef, which was a record-breaking achievement.

As of early 2021, Yung Filly was single. Thus, he participated in the FootAsylum’s YouTube dating series ‘Does The Shoe Fit?’ alongside Konan, Harry Pinero, KSI, Jordan Hames, and Jack Fowler. He competed against them to have a chance to win over a girl during each episode.

According to Yung, he wasn’t looking for a girlfriend nor a wife then, and if he ever had to, he doesn’t mind dating someone taller than him.

Talking about his “relationship” with Emily Hobbs, Yung didn’t speak much about it. Although Emily claimed that the two spent the night together over a TikTok video, where she made fun of Yung “moaning like a woman”, Yung just plainly ignored it.

As for Yung’s fans, they thrashed Emily for being an attention seeker, even and body-shamed her labeling her as “a dinner lady”.