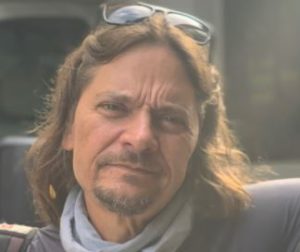 Filling in the absence of Frank Fritz, Jersey Jon once again appeared in American Pickers season 22 in the episode that aired on January 25, 2021. For those who are the show’s long-term fans, Frank was an old familiar face who originally appeared in season 7 back in 2012. But for the new ones, Jersey was a whole new book to explore.

Keep reading this Jersey Jon wiki to learn all about the American Pickers star.

As per his birthday, Jon is either Aquarius or Pisces zodiac.

Jersey Jon was born to parents Frank and Mary E Szalay. He inherits the skills for remodeling and repairing motorcycles and motorbikes from his father late father Frank. According to Jon, his dad ran an engine repair business, sold lawnmowers, and had a franchise as a Bronco minibike dealer. He added,

“I learned about mechanical things in dad’s shop, including an appreciation for small engines.”

Also, Frank was supportive of his son following in his footstep. It was Jon’s dad who signed the papers for the original renovated bank he bought when he was 17 years old.

As for Jon’s mother Mary, she passed away peacefully on mother’s Day, May 12, 2019, at the age of 84. She hailed from New Brunswick, NJ, and worked as a substitute teacher at St Michael’s Church. Also, she had a small side craft business as owner of Renaissance Treasures and an at-home “pay on your honor” type plant stands.

Talking about Jon’s siblings, he has a brother named Frank Szalay and two sisters named Jennifer Szalay- Kosden, and Mary Ann Jarvis. Also, Jon’s had two other siblings named Susan and Daniel who left this world a long time ago.

As of March 2021, Jon Szalay entertained 8.3K followers over Instagram @jsrestore. Most of his posts pictures from his work — bike parts, machinery, and of course bikes!

Mentioning his distinct features, Jon had long wavy hair which he often hid under his cap.

Talking about his time on American Pickers, Jon is an all-around antique expert specializing in motorcycles and motorbikes built in the early 1900s. Even when he wasn’t officially the cast of the show, Jon often popped up, when the crew needed his expertise.

As someone who loves bike parts — more to restore than to collect — Jon has been in the game for almost his entire life. He shared the even before American Pickers was a thing, he knew Mike Wolfe.

But Jon’s expertise doesn’t come from studying antiques in college, rather it’s a lifetime experience working in a specific field. However, he did attend Central Regional High School and graduated in 1981. As for his college, he mentioned “School of Hard Knocks, The University of Life”, as his teacher.

In 2021, Jon was working out of his repair shop located in New Jersey called “First National Antiques Restoration”. Over his site, Jon mentioned he could repair a whole bunch of things — from metal to glass to wood to fabrics, he repaired it all!

Also, many famous people came to Jon for their things to be fixed. In 2015, the TV host Jay Leno stopped by his workshop, and the two talked for a while about “old bikes and machines.”

As of 2021, Jersey Jon mentioned himself as “single” over his Facebook profile. Guess, the man wasn’t together with his wife anymore. However, he still tagged Andy Kelly as his “bother-in-law.” Since the two were both bike fanatic, maybe they maintained their relationship.

Jon and his former wife share a son named Jonathan who was married to Oriana Szalay and has 3 kids.

Busy with American Pickers and his workshop, Jersey decided to spend his life working on machinery. Maybe sometime later, he might rekindle his love life and find a girlfriend. But as of 2021, he wasn’t dating.