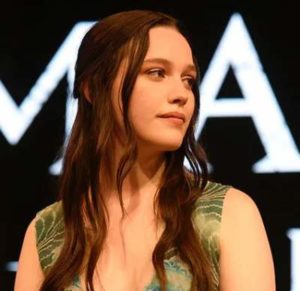 Victoria Pedretti is an American film and television actress, best known for her role as Eleanor (Nell) Crain in the Netflix television series The Haunting of Hill House.

Not to mention, she famously played the character Love, Joe Goldberg’s new love interest in the second season of You, another binge-worthy series on Netflix.

Victoria began her film career starring in the 2014’s short film Sole and later in 2017, earned a Bachelor of Fine Arts in Acting from Carnegie Mellon School of Drama.

Now, look further into her life, everything you may need to!

As of the time of this writing, Victoria Pedretti had not been pledged to anyone in marriage. The up-and-coming actress seemed rather indulged in her getting-big career.

And, at the time, even if she was romantically committed to someone, the matter remained completely aloof. For some reason, this part of her life is fully under wraps. As a result, there simply were no cues about her past relationships as well.

More to it, there were no records of any romance rumors with the celebs she works with on a daily basis.

Although, on screens of TV shows, she lived to quite some romances.

In You, the psychological thriller, Joe (played by Penn Badgley) meets Victoria’s character Love Quinn, an aspiring chef, and health guru, and they fall in love. 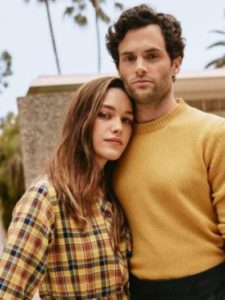 In an interview with BAZAAR magazine, Victoria shared that the most unsettling scene for her to do in You was the sex scene where the actors were both meant to start having sex and come simultaneously in five seconds. “I found that really disturbing. I was like, “How are we …? That’s not real…That doesn’t happen in real life.”— Victoria commented.

What she meant by that was, as responsible filmmakers, when choosing to portray sex, one should do it “responsibly”, or at least “somewhat realistically” (especially to the young audience).

Kudos to Once Upon a Time in Hollywood actress, for proving to become a responsible actor.

No doubt, Victoria Pedretti will (or already has) attract a partner with a beautiful mind like hers.

Does Victoria Pedretti Have A Twin?

No, Victoria Pedretti does not have a twin.

Amid the release of You, her fans were very busy tallying her looks with Kat Dennings from 2 Broke Girls. They thought she even sounds like her. While the others thought she looked like a mix of Kat and Hilary Duff.

Meanwhile, in reality, Victoria has a sister, “technically half-sister”. Although, she is 25 years her senior. The actress said, since she was a kid, she has this strong bond, a want to be near her, and be protective of her. Victoria continued gushing:

“She is my favorite person in the world, pretty much. I think the bond between siblings is really powerful. I feel really lucky.”

More on her family, her father Michael Pedretti is a professor.

Her father is of three-quarters Italian descent (including ancestry in Lombard and Trieste, and Swiss-Italian roots in Switzerland).

And because her maternal grandmother was Ashkenazi Jewish, Victoria had a Bat Mitzvah ceremony.

Victoria Pedretti was born to her parents on the 23rd of March 1995 in Philadelphia, Pennsylvania.

Based on the online reports, Victoria Pedretti’s net worth as of 2018, was listed as $100 thousand. Again, the next year, it was re-reviewed at $300 thousand. And her fortune for the year 2020 still seemed under review.

Last reported Victoria was represented by The Gersh Agency and Management 360, both in Beverly Hills, California, United States. And, per her IMBD, she was to reprise her role as Love Quinn in the third season of You.

Plus, her Wikipedia said she was to star in the second renewal of The Haunting of Hill House, called The Haunting of Bly Manor. Because the show is an anthology series, Victoria would play an entirely new character from the one she depicted in the first season.

A versatile actor, Costa Ronin skyrocketed to fame starring in the FX spy-centric 2014 drama “The...