Vicky Turner Wiki: Kyle Christie, Age, Parents, Who Is She 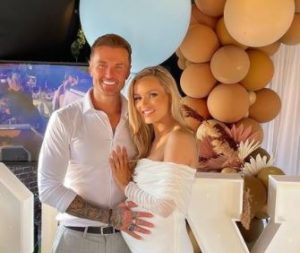 Vicky Turner might be a fashion model, but she was more popular as the girlfriend to MTV’s The Challenge star Kyle Christie. But as much as she loved the fame that came along with it, she wished for her own recognition as well.

So, here is shedding light on her private life over this Vicky Turner Wiki.

As per her birthday, Vicky is of the Virgo zodiac.

Fun Fact: On Vicky’s 25th birthday, which fell when the world was in lockdown due to the COVID-19 pandemic, her friends brought the party to her home. They decorated her rooms with balloons and glitters and they had a blast.

“Family time is my favorite time,” Vicky said. It seems that Vicky is a family girl and always made time for all of them. The last we saw her with her family was at her brother Andrew Turner’s wedding in August 2016.

At the time, Vicky Turner even took it to her IG to post a picture with her mother Christina Turner from the wedding, captioned, “I can’t believe how stunning my mum looked yesterday. Definitely the most beautiful mother of the groom I’ve seen.”

However, Vicky didn’t talk much about her father. From the looks of it, Vicky’s parents are long divorced. The only time we found Vicky talking about her dad was with her sister Amy Hodgson in July 2012 (over a Tweet).

As of 2021, Vicky’s mother was single and living in Sheffield.

Talking about her siblings, Vicky’s sisters are Bronny Embleton, Ellie Ruby Unwin, Emily Sands, Sophie Wood, Rebecca Cornelius, and Abbie Rose Lockett. And her one and only brother is Andrew Turner. He is a Missouri State Soccer Alum who went on to marry Tori Turner.

Vicky Turner is a model and social media manager by profession. As of 2021, she was working with the Boss Model Management, and The Social Co.

Reportedly, Vicky joined Boss Model Management back in February 2018. At the time, she even took it to her IG to write that she was “looking forward to taking the next step in (her) modeling career and working with @bossmodelmanagement team in the future.”

Since then, Vicky has reeled in quite a lot of offers and even got featured on the massive billboard advertising for Diamond White. Also, she has modeled at “London Fashion Week” twice for two different brands.

Aside from modeling, Vicky has also treaded the world as a beauty pageant. Her first-ever pageant was back in 2015 when she became the winner of Miss Newcastle and three years later, in 2018, she finally became the Miss Universe Great Britain finalist.

Vicky even participated in the fundraising program for a charitable foundation created to empower, support, and protect women worldwide called “A-Sisterhood.”

Here are some of her jobs timelines:

Just in case you are curious, an average social manager in the UK made around $34 thousand per annum.

In light of her education, Vicky graduated from Aston Comprehensive School in 2012. Then she went on to study journalism at Northumbria University and graduated in 2017.

It was the year 2018 when Vicky Turner met the love of her life, Kyle Christie. Fast forward to 3 years of dating bliss, the two revealed their pregnancy in March 2021. Three months later, they held a gender reveal party and shared “it’s a boy” over their IG.

Vicky and Kyle’s baby was due in September 2021.

As for their wedding plans, the two had yet to decide if they are ready to settle down or not. As of 2021, Kyle was busy with his filming of The Challenge season 37 and was focusing on making a comeback after he was eliminated by contestant Fessy Shafaat in the previous season.

In case you missed it, Kyle lost one round in the game hall brawl and broke his finger, which disqualified him from competing in the rest of the game.

One Reply to “Vicky Turner Wiki: Kyle Christie, Age, Parents, Who Is She”