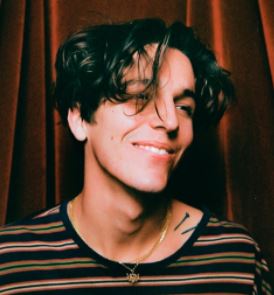 Tuck Pillsbury is a pop singer/songwriter who first introduced himself through his EP, Arizona in the summer in 2017. Also, he went by the stage name “Role Model” and was signed Benny Blanco’s Mad Love record label then.

In August 2020, Tuck was back to the limelight but this time, not for his music, rather for his dating life. He was believed to be dating the Youtube star, Emma Chamberlain and surely he gained everyone’s attention.

So, here were are letting you in on the insides of Tuck Pillsbury through this wiki-style article.

Corresponding to his birthday, Tuck is of Taurus zodiac.

Fun fact: Tuck and his alleged girlfriend Emma Chamberlain share the same birth month. However, Emma is 4 years younger in age than Tuck.

Trivia: When Tuck was 7 or 8, he used to dress up like Elvis on holidays and perform with his aunt, in front of his mom’s whole family. He was obsessed with Elvis.

Tuck Pillsbury’s family of 5 resided in Maine, US. He is the youngest of three siblings and his parent’s name is Rusty and Susan.

Reportedly, his father Rusty worked as a real estate appraiser whereas mother, Susan was a special education teacher in Cape Elizabeth school.

Also, Tuck attended to Cape Elizabeth High School in Maine. It was during his time there, Tuck first started his musical journey. Before that, he was set on becoming a movie director/producer.

He recalled that some of his rapper friends had left their recording equipment in his dorm room. Playing around with the equipment and going through YouTube tutorials, Tuck soon started to rap and record.

Moreover, Tuck loved to write and create stories. Thus, he ventured into singing and songwriting. He shared,

“Writing was the only thing in school I really loved.”

After graduating from Cape Elizabeth in 2014, Tuck joined the Point Park University. A few months in, Tuck wanted to drop out to pursue music as a full-time career. However, his parents convinced him to stay.

Nevertheless, Tuck started performing rap at Pittsburgh clubs and put music online. Soon, he would go on to perform at the Maine State Pier in June 2016 that featured Post Malone and Fat Joe.

“When he started making music, it wasn’t a surprise. The surprise was seeing him get up on stage,”

He often visited his family on vacations and went for shopping and skiing excursions.

You may like – Elarica Johnson Wiki: Married, Age, Height, Ethnicity

Tuck seemed to be keen on tattoos. He had different objects (like a ladder) tattooed all over his arms. Also, he had a face tattoed over his chest and butterfly in his stomach.

Also, he flaunted 85.7K subscribers over his Youtube @ROLE MODEL.

Tuck Pillsbury’s net worth was estimated to be around $800 thousand in 2020.

Talking about his career, Tuck started writing; pouring his depression into music after a skiing accident. The music he made was honest and much of his lyrical content was drawn from the time when he was living alone in Pittsburgh.

Also, Tuck shared that he wanted people to find “beauty in pain” through his songs. With music production becoming more accessible,  he believed that anyone could make a song and you didn’t need to have lots of money.

In 2019, Tuck released a six-song EP signed with Interscope Records. His manager was Cole Silberman then.

Apart from this, Tuck was a big fan of SZA. When asked about what his goal in 2019, he shared,

“I still have the same goal as last year, which is to hug SZA.”

Furthermore, Tuck was also inspired by Mac Miller. However, his dream collaborator is Tyler, The Creator.

As for his merch, find it on heyrolemodel.com.

Coming to the allegations on Tuck Pillsbury dating Emma Chamberlain; both didn’t officially disclose what was going on between them as of August 2020.

However, fans have established Emma to be Tuck’s girlfriend. The reason being — Emma posted a series of pictures detailing some of her endeavors and she had tagged her best friends including Tuck. Also, the post mentioned that Emma’s parents followed Tuck on Instagram. What more could a fan need?

Moreover, Emma had broken up with her former boyfriend Aaron Hull.

While all of these supported their dating allegation, “Seventeen.com” believed otherwise. They were convinced that Emma was dating Ethan Dolan as of July 2020.

Kristina Alice is one of many such people in showbiz who landed media and public attention after the romance...