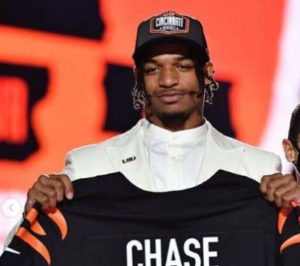 Ja’Marr Chase has been selected by the Cincinnati Bengals at pick No. 5 in the first round of the 2021 NFL Draft. Believing Ja’Marr is one of the best receivers ever evaluated in the draft the club trusted upon him to come in and make a difference.

In the meantime, here’s writing, covering yet unveiled details of his personal life.

So, Spotrac has projected— Ja’Marr Chase’s contract with the #Bengals should be: fully guaranteed 4 years contract worth $30.8 million, with a $19.7 million signing bonus, $5.6 million 2021 cap hit, and, with, of course, a 5th-year option available.

According to Jeff Tracy of Axios, Ja’Marr could earn an estimated $263,000 per year from social media alone.

Even though at the time, he was far behind from making about $47.8 million per year just from Instagram posts like Cristiano Ronaldo, Ja’Marr Chase had already managed a net worth of $15 million.

He now aims to break every record the Bengals have. Ja’Marr shared his plans with the world right after he was picked by the club. He said he plans to push Johnson and the rest of the team’s best wideouts down a peg. His prediction on the team’s website read:

“I’m going to break every record they’ve got. That’s my goal right there. I’m telling you right now. I don’t know how I’m going to do it, but it’s going to get done.”

To be more precise, he aimed for 1,500 yards and 10 touchdowns as a rookie. Anyway, the Bengals are likely to be happy even if he falls a little short of the aforementioned scores.

Considering his track record against future NFL cornerbacks in the SEC, the aptness “to easier project the talents of skill players after a year of opt-outs” and his historical connection to LSU quarterback Joe Burrow, the Bengals’ decision to draft Ja’Marr was not nearly as shocking. Many in the industry had predicted this day.

Over the years, the Bengals have had wide receivers like Isaac Curtis, Cris Collinsworth, Carl Pickens, Chad Johnson, and A.J. Green put up a good fight for them.

Late in 2019, Ja’Marr was enrolled in LSU’s Project Graduation degree program and continued to pursue his undergraduate degree. Before he started all 13 games for the LSU Tigers, Ja’Marr played high school football at Archbishop Rummel High School located in suburban New Orleans.

After learning about the Cincinnati bound, Ja’Marr Chase was all smiles because of many reasons. The NFL had his father Jimmy Chase Sr. record a video message to him. While his mother Toeleah Smith Chase wrote him a letter. It was indeed an emotional night for Chase and his family.

Ja’Marr was born in Harvey, Louisiana to his parents. His parents have supported his football career all along the way. They now lived in New Orleans, Louisiana while Ja’Marr’s Twitter marked Los Angeles as his current residence.

In an Apr. 30, 2021 tweet, Ja’Marr Chase mentioned that his sisters Taylor and Mia were “fired” about their brother joining Bengals.

Ja’Marr committed as a true freshman at Louisiana State University in 2018. Around the time, LSU released his portfolio on its website which read his height as 6′ 1″ and weight as 200 pounds.

Ja’Marr Chase Girlfriend: Is He Dating Anyone?

As a sophomore in 2019, he led the Football Bowl Subdivision in receiving yards and receiving touchdowns and took home the Fred Biletnikoff Award as the country’s best receiver. The same year he was also unanimously voted to the College Football All-America Team. While information as such was covered by every big to small media outlet out there, his dating life, meanwhile, remained completely obscure. Or maybe Ja’Marr Chase was simply single (as of early 2021) rather than focusing on his rising career.

His Instagram, entertaining 328K followers, was devoid of any romance life clues. But his several years old from now tweets did give away some gossips to those that have been curious.

For instance, in one, where a fan asked him “who was your first girlfriend in elementary school?” Ja’Marr Chase had answered he never had one. Likewise, in one dated Jan. 2, 2017, he affirmed he sometimes had a serious girlfriend. In March 2015, he tweeted he has not had a girlfriend in a while. The next year, Ja’Marr had written about not being able to have a wife.