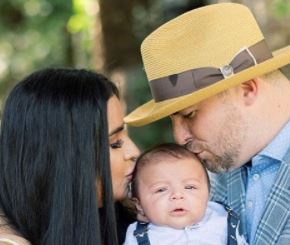 While the 2020 quarantine was a blessing to many couples, it also became a reason for some to fall apart. Likewise, treading on the darker side was the Shahs of Sunset star Mercedes Javid and her husband, Tommy Feight.

Over Bravo’s The Daily Dish podcast, aired on 1st August 2020, Mercedes talked about the challenges she and her husband were faced during the quarantine. She shared that Tommy and she would get “into little lover’s quarrels” and it was getting “difficult” to live “under the same roof”.

So, who is Mercedes’s husband that she might soon divorce? Stay till the end to learn everything about him over this wiki.

Corresponding to his birthday, Tommy is of Capricorn zodiac.

On Tommy’s 47th birthday, Mercedes took it to Instagram to wish him and at the same time express her gratitude. A part of her caption wrote,

“This is the man who I waited to meet. The one who tamed me, as wild and untamable as I was, until he came along. He knew before I did that we were meant to be.”

As for his interests, Tommy loved cooking and making people laugh. Also, he was a big football fan.

Born and raised in hometown New York, Tommy Feight grew up as an “angry kid who felt like he got singled out by life”. He shared that life hits everyone at some point, it just hit him earlier than others.

But fortunately, he met a Maguire couple who offered him “compassion, love, and understanding”. And though Tommy didn’t talk much about his biological parents, it seemed like he accepted the couple as his mother and father.

All we know is, Tommy’s mother passed away long ago. “Smiling with a big bouffant of red hair”, this is how he remembers his mom. She would have been 69 on March 27, 2020.

Family isn’t always one you are born into, they come in many forms. And Tommy was lucky enough to find someone who chose to make his world a better place.

Also, you can find pictures of the Maguire couple over Tommy’s Instagram.

Information about his siblings was unavailable.

Mentioning his distinct features, Tommy has an oval face and liked to maintain almost bald hair. Also, he has brown eyes.

As of October 2020, Tommy entertained 68.2K followers over Instagram @tfeightnyc.

Talking about his job, Tommy Feight worked as the Marketing Director for Blow & Drive Interlock company that developed techs for the government to keep the streets safe and save lives.

Also, the company marketed the sale of breath alcohol ignition interlock devices that are installed on a car’s steering wheel. The driver has to blow into it to ensure they’re not intoxicated so that the car can start.

In 2020, Tommy Feigh’s net worth was under $1 million. Just in case you are curious, the average salary of a Marketing Director was around $88K yearly.

Though Tommy is a good man now and has confessed that he was an angry young lad, his criminal records remain. He was arrested for drug paraphernalia and weapons charge from 2007 in Las Vegas. A fine of $500, one-year probation with a drug counseling course was sentenced for the charge.

Apart from this, he was reportedly sentenced to L.A. County Jail for 10 days after allegedly trespassing, and vandalizing Reza Farahan’s home in May 2019. Also, he received a three-year restraining order against Reza.

Tommy Feight and Mercedes Javid first met on the dating app Tinder and after dating for over a year, the duo got engaged in 2015.

After spending 3 years as an engaged duo, Tommy and Mercedes decided to get married on April 21, 2018. They held the wedding at the Jeremy West Hollywood with Reza Farahan as the man of honor.

And a year later, on April 17, 2019, they welcomed their kid named Shams Francis Feight. Furthermore, in an interview with Page Six, Mercedes admitted that she would love to have at least one more kid.

Unfortunately, as of October 2020, the quarantine got the best of them and the duo was thinking about divorcing. Mercedes shared,

“We’re both busting our butts doing our best every single day, and yet, I feel like he wants to divorce me.”