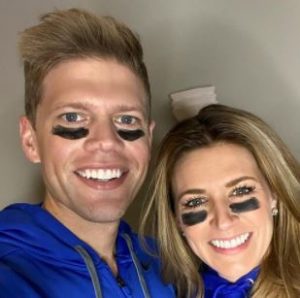 Starting from lipsync and dance videos, TikTok now encompasses every genre possible out there. From doctors to farmers, wrestlers to painters, you can find anyone on the platform. Likewise, riding the diversity train, The Braces Guy put himself up in the lights, thanks to his oral hygiene tips and hacks.

His videos featured the benefits of orthodontic work, ways to keep teeth healthy, and like his name suggests he seemed to be an expert on braces. Not only were his videos informative but also they were entertaining and easy to understand. No wonder, he amassed millions following in a short time.

So, who is The Braces Guy? Delve into his personal world over this article.

Corresponding to his birthday, he is of Capricorn zodiac.

Over TikTok, he occasionally asked his followers to guess his age. As he seemed a lot younger than his actual age, most fans were surprised when he revealed himself to be over 35. It seems dental really does some trick on appearing younger.

The Braces Guy from TikTok is known as Grant Collins to his family. His real name is known to many and most of his fans called him Grant as well.

Raised in his hometown Rochester, Minnesota, he spent his childhood with two little sisters Leslie Jorgensen and Jenna Nelson. The three siblings were close to each other and they even appeared on IG doing the “I’m just a kid” challenge. They reenacted a cute family picture from 1989 in 2020.

As for his interests, he likes playing soccer, strumming the guitar, and traveling. Also, he loved attending his patient’s community activities that involved activities like theatre, dance, music, and sporting events.

Mentioning his distinct features, he has mysterious blue eyes and a chiseled jawline. Also, should we mention his flawless bright teeth?

Yes, find The Braces Guy over Instagram with 199K followers and Youtube with 5.17K subscribers in 2020. It’s much fewer numbers compared to his 3.1M followers over TikTok then.

The Braces Guy is an orthodontist. And yes! That means he is a real dentist.

He was the founder of Collins Orthodontics located at 1340 Salem Rd SW, Rochester, MN 55902, United States. Reportedly, he opened the clinic in Dec 2014 with a will to create a workplace of “happiness” and “rejuvenation” — “a workplace without gossip, without negativity, without blame, without fear of making mistakes.”

Before this, he had a job at Alpha Orthodontics as an orthodontist.

Just in case you want to know, an orthodontist in  Minnesota made an average of $251 thousand per annum.

Does The Braces Guy [TikTok] Have Merch?

Grant Collins aka The Braces Guy is a married man. His wife and kids were occasionally featured over his TikTok. If you missed them, The Braces Guy had a beautiful wife named Kimberly and three kids named Caden, Grayson, and Lennon.

Talking about his love life, The Braces Guy and Kimberly were married for over 12 years. The duo held their wedding anniversary on August 23, 2002. And over a decade later, their love was still stronger than ever. The love birds were often seen heading out for “date night” enjoying theater movies or just a short ice cream trip.

Also, he sure knew how to keep his family happy. On Christmas 2020, his wife, kids, and himself, all were were dressed up in matching pajamas and enjoying the Christmas bliss. Plus, Kimberly blessed everyone with her beautiful voice with a song from the movie, Frozen. And by God, She can sing!

As for the rumors concerning if The Braces Guy is gay, it should have been already clear by now that he is not.