In late-2020, fans learned Bachelor Nations’s former contestant Mikey Tenereli was about to get hitched! Amid the Christmas celebration in 2020, he made headlines after he got engaged to his girlfriend Kate Wood.

Here’s everything you need to know about him, and his relationship with now-fiancé Kate.

Born with the personality traits of a Scorpio, Mikey Tenerelli turned 38 years of age on November 17, 2020.

Originally from his hometown of Glen Ellyn, Illinois, Mikey, at the time of this writing, called himself a dweller of Warrenville, Illinois.

It is obvious Mikey Tenerelli is very fond of his parents. Sometime in 2015, as his father had turned 71 and his mother 60, he had said, “I’m sorry but my parents deserve a medal, or a cookie, or something. I hope I look like that at their age.”

His parents had celebrated their 35th wedding anniversary in 2017 when Mikey had written to a picture of them,

“They are a true example of the love and dedication two people can share. I love you! 🌹❤️💜”

Further, in the family, Mikey Tenerelli had a grandmother who turned 85 a couple of years before and a Chicago-living sister, Melissa. Melissa got married in 2016 and has an adorable daughter Evelyn who Mikey is very fond of.

According to Mikey Tenerelli’s profile on Games Crossfit, his height is 6′ 1″. Also, they reported his weight to be 215 lbs.

On Instagram, Mikey had shared 314 posts and 30.8k followers people followed him until the time of this writing.

Besides, he had lesser popularity on the rest of his social media profiles i.e. Twitter and Facebook.

Mikey Tenerelli first made a name for himself in reality television competing for Desiree Siegfried on the ninth season of The Bachelorette. He again appeared on the second season of Bachelor in Paradise.

During the reality TV days, he worked as a plumbing contractor. Now (2020), a Vice president, at the same company i.e. Caldwell Plumbing-Wheaton, he continued in the stint since November 2005.

All along, Mikey also became the owner of the gym CrossFit Alpha Dog in April 2013.

Regarding education, he received graduation in B.A. Business Studies from North Central College in 2005. And from 1998 until 2001 he attended Glenbard South High School where he used to be the captain of his college football team.

In the meantime, Mikey, who also got paid in Cameo by people booking for his personalized shout-outs, had reportedly accumulated a net worth of over $700 thousand (as of 2020).

Based on Mikey’s aforementioned engagement, one can say without any doubt that Mikey is no longer together with Juelia Kinney who competed on ABC’s The Bachelor season 19 and Bachelor in Paradise season 2.

Sometime in 2015, Mikey and Juelia were one of the most adorable, “albeit, unexpected” couples to come out of Season 2 of Bachelor in Paradise. Although the courtship had many cheerings, they were unable to keep their romantic fire alive and had even disappointed the fans with it.

Both Mikey Tenerelli and soon-to-be wife Kate Wood took the exciting news on their respective Instagram on 28 December 2020. 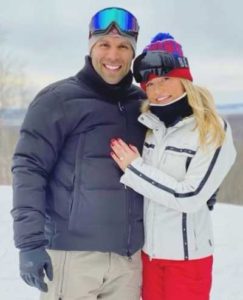 Mikey Tenerelli is engaged to his girlfriend! (PIC: Mikey’s IG)

To a picture of them, all-smiles and Kate showing off her shiny new stones, Mikey wrote, “The future Mr. and Mrs. Tenerelli!!! Best day of my life! 💎❤️”.

While Kate, on hers, captioned, “Future Mrs. Tenerelli coming to you real soon!!!!!! I love you forever @themikeytenerelli !!! ❤️🥂💍”.

However, at the time, they had not said anything about when they would be getting married.

From what it seemed, Mikey wet down on one knee at Nub’s Nob, which is a ski area in Pleasantview Township, near Harbor Springs.

Dating at least since February 2017, they have always been using endearing terms for one other and Instagramming their dating life.

Just when you might have wondered ‘what Kate did for a living?’, the Detroit – Cհicaɡo dweller is a hairstylist, at the time, working as an apprentice at M & Co. Salon.

Also, not long ago on September 19, 2020, she celebrated her anonymous number of birthday. On the occasion, Mikey wished her with the “Happy bday to my partner in crime, I love you! ❤️” to which she replied, “I love youuu!!! 🔥🔥”.