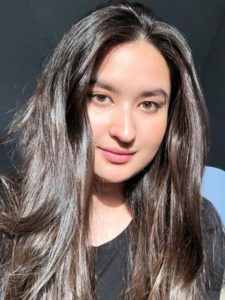 2019 hit single I Love You 3000 was a pure creation out of the experimental interaction for the original song between the singer Stephanie Poetri and her followers. The song was released on 3 June 2019, which made her a viral sensation.

This wiki unfolds details on your beloved singer so scroll through. Before we delve into the dating status,

Stephanie Poetri Dougharty shares her birthday with pop singer Rachel Platten which is on 20 May. She turned 19 years old in 2019.

Her parents tied the knot at a beautiful wedding in 1999. But the marriage with her husband short-lived and ended in divorce in 2006.

Stephanie stands at a moderate height of 5 feet 4 inches (1.62 meters).

Raised by the parents who were already knee-deep into the music industry, it didn’t take Stephanie long before she hopped on the same boat.

Stephanie went through several phases when it comes to taste in music. As a kid, she adored the music of My Chemical Romance, Good Charlotte, and Linkin Park.

When that phase ended, she was into Kaigo and Major Lazer right around the time when she was in eighth grade.

After she graduated high school majoring in Visual Arts, pop music started hitting her the most. She started listening to Jeremy Zucker, Blackbear, and several more.

Before I Love You 3000, her self-titled YouTube channel served as a platform for cover song videos and vlogs. After her fateful exercise on creating an original song on her Instagram, it all changed.

The curated version of the snippet she created with her Instagram followers which became I Love You 3000, gained her over 350K+ subscribers within a month. As of February 2020, her YouTube channel has 834K+ subscribers.

Stephanie inked the contract with 88Rising, a record company from the United States. She made the announcement official in an interview with The Lunch Table at a music festival named Head in the Clouds Festival.

She teamed up with Jackson Wang of GOT7, a Korean boy band, and created a remix version of the hit song titled I Love You 3000 II. The song was featured in the album Head in the Clouds II which was released on 11 November 2019.

With her budding career as a singer-songwriter, Stephanie was able to secure a net worth of $400,000 and a record deal with 88Rising, a record label that supports Asian musical talents.

Like most up and coming career-centric musicians, Stephanie preferred people focusing on her career rather than her details.

In an interview with bandwagon.asia when asked,

…the character says that she wants her lover to come out of the blue. Do you feel that way, too?

Stephanie deflected the dating question with a sly reply that read,

As much as I love surprises, I’m too curious to ever be surprised. When my friends try to surprise me, they don’t get very far because I can always see it coming!

Which in a way proves her disinterest to share her boyfriend and relationship details.

The Song I Love You 3000 was created out of the line said by Morgan, Tony Stark’s daughter, in Avengers: Endgame.

In 2014, she competed in Idol Junior, a talent hunt program.

What’s more, Stephanie moved to Los Angeles from Jakarta, Indonesia to pursue her career as a musician.

I Love You 3000 went on to have 28 million spins on Spotify within the month of release.

Also, She is nominated for iHeartRadio Music Awar for Social Star.

Before Stephanie, two artists, Rich Brian and NIKI, from Indonesia signed a record deal with 88Rising.