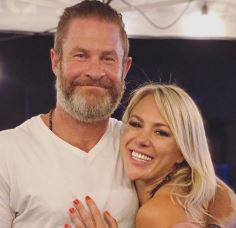 Entrepreneur and owner of multiple companies, Sean Whalen tied the knot with his fiance Saxony Whale in February 2021. The man with multiple business ventures who goes by the motto, Lions Not Sheep, has found a match in his wife.

Fans of the influencer wanted to know further details. Scroll down this Saxony Whalen Wiki to learn more about Sean Whalen’s wife!

Saxony Whalen was born on 16 August 1983. She celebrated turning 37 years old while celebrating her birthday in August of 2020. Furthermore, Saxony is a Leo-native as per her date of birth.

Saxony Whalen, maiden name Dipo, was born to her parents Scott Dipo and Jevine Lane in her hometown in Utah, the United States. But, after staying married for a while, her parents parted ways that eventually ended in divorce. While no details surfaced on her father post-marriage, her mother met another man and got married again.

More about her family: Saxony grew up with her three siblings. She has two brothers named Evan Dipo and Taylor Dipo, and a sister named Chiara Lane. Her brother Taylor welcomed a daughter with his wife in 2020 which made Saxony an aunt.

Starting with her height, Saxony Whalen elevated at a height of 5 feet 5 inches (1.65 meters). Since she frequented the gym to stay active and healthy, she weighed not more than 67 kilograms (147 lbs).

Also, Saxony has lush blonde hair, has stunning measurements of 37-26-36 inches, and flaunts colorful sleeve tattoos on her both hands, right arm, and a big one below the navel.

Going through social media one can tell Saxony Whalen enjoys being online and sharing details about her life publicly. As of March 2021, her Instagram account garnered 9870 followers where she posted 763 times. In the same way, she also stores information related to family and career on her Facebook account.

More From Us: Elisa Jordana Husband, Net Worth, Height, Parents

Saxony Whalen attended Brighton High School. She graduated in 2001 from school. Starting 2003, she joined Citadel Financial Group/Avid Mortgage 2003 as a loan officer. She served the company for three years until 2006.

Later in 2007, Saxony joined Wells Fargo Bank. From that point on to 2011, she worked in the bank in several positions. But before she left her job, Saxony had already founded Sink or Swim in 2009. The company specializes in providing real estate design and staging services.

However, Saxony decided to pursue education and joined the University of Utah in 2014. She studied business administration until 2016. As of March 2021, Saxony was working as a realtor in Sandy and Salt Lake City. Her association with Equity Real Estate LLC began in 2015.

While not busy with her job, Saxony demonstrates her athleticism on social media. She participated in several physical events. From hitting the gym, competing in physical activities, weight lifting, she does it all to prove her worth. She competed in TSC Spring 2016.

Saxony Whalen’s career thriving career in finance paid her well in her 17 years career. From her work as a banker to a realtor, she was able to accumulate a total net worth of under $1 million.

Sean Whalen made his debut on Saxony’s Instagram on 11 August 2020. She wrote a long caption explaining what it was like being in a relationship. In the end, she showed appreciation towards Sean saying she gave him her fire and her heart.

This statement hinted at the failed past relationships each had before they could find the one and settle down. However, the length of their dating life remained a mystery as of this writing. The couple got engaged in early October 2020.

“…On a day that I didn’t feel my finest, he showed me how lovable I truly am….”

Saxony further showed gratitude for adding 3 kids in her life and couldn’t be more excited about the adventure that was about to come. Sean and Saxony married on 21 February 2021.

Together, they also started their own podcast titled The Sean and Sax Show on 16 February 2021.

Saxony Whalen raised two boys on her own as a single mother and loved them more than anything in her life. She welcomed her first son Tyne into the world when she was only 19. He turned 18 years old in July of 2020.

The values Saxony instilled in her kid reflected on his empathetic, resilient, and driven nature. She also has another son from her previous relationship. Neither she revealed the name of her ex nor revealed his identity.