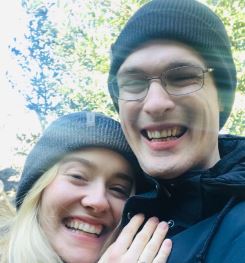 In this Sam McInerney wiki, we highlight the understated facts about Kennedy McMann’s husband. In doing so, read about his age, job, and height.

Sam was reportedly born in 1994 with Leo as his zodiac sign.

On his 2018 birthday, Kennedy wrote a sweet message on her IG. It read— “happy birthday my crazy man. love you more than christina tosi”.

Although Sam McInerney didn’t openly flaunt his family, some fans noted a man named Clayton interacting with Kennedy on Instagram.

According to his social media profiles, Clayton worked as a actor. A graduate of Columbia University, he lived in New York as of 2021.

Back to Sam, he attended the Carnegie Mellon University. The Arizona-native graduated in 2016 from the same with a Bachelor of Fine Arts (BFA) degree.

Sam McInerney towers over anyone of average height including his wife, Kennedy McMann. To be more precise, he stands 6 feet 3 inches tall.

As of Jan 2021, Sam didn’t have a heavy presence on social media. Even interestingly, we couldn’t trace him on Instagram and Twitter.

However, Sam regularly popped up on Kennedy’s IG. Often the posts about him celebrated the milestones they achieved as a couple.

What’s more, Sam owned a profile on Facbeook but with limited access to friends and family.

Much like Kennedy, Sam McInerney is also an actor.

Although Sam didn’t own an IMDB page as of Jan 2021, he sure bagged acting experience under his resume.

While in Carnegie Mellon University, Sam starred in several theater production including The Plauge In Venice, Fool for Love, The Things We Do To Survive, and The Comedy Of Errors.

In the Ali de Souza-directed The Tempest, Sam also starred as Trinculo. The Royal Conservatoire of Scotland served as the venue for the production.

All in all, Sam kept his finances at bay. That said, Kennedy McMann reportedly enjoyed $500 thousand in net worth.

While attending, Kennedy McMann met her future husband, Sam McInerney. One of their professors named Barbara MacKenzie Wood introduced them to one another.

Sam and Kennedy officially began dating in December 2014. Most Decemeber after that, the actress took to IG and celebrated their anniversary.

4 years into their love life, in Dec 2018, Sam finally asked Kennedy the big question. On New Years day in 2019, Kennedy shared the engagement news via Instagram. At the time, she wrote—  “I truly do not know life without you and I hope it stays that way for the next 80 years (at least). I’m so excited to marry you. Wowie wowie what words!!! Though as you said, it’s pretty weird, because it feels like I married you a long time ago.”

A year after the engagement, Sam and Kennedy visited the proposal spot. The actress even shared a sweet IG post to mark the trip.

Amid the ongoing pandemic, Sam and Kennedy tied the knot in an intimate wedding ceremony in 2020. Via Twitter, Kennedy announced the nuptials writing— “a little while ago, we got married. we’re gonna do it again with our beautiful friends & family later. best thing we’ve ever done. forever for us started a long time ago, but now it’s on a piece of paper. so deeply happy to be married to you my dearest sweetest love.”

As of Jan 2021, the couple was yet to welcome kids into their lives. However, Sam and Kennedy seemingly enjoyed the company of their fur babies: a puppy and two cats.

A little info about Sam’s wife: Kennedy McMann is the native of Holland, MI. Before “Nancy Drew,” she appeared on TV shows “Law & Order: SUV” and “Gone”. Lisa and Matt McMann are her parents. While Lisa is an author, Matt works as a musician.