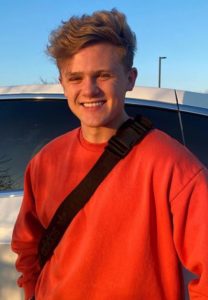 YouTuber Ryan Trahan created quite a following on several social media platforms. He maintained quite intimate relationships with his followers and subscribers by letting them into his life through those platforms.

Among many things Ryan shared over the years, the engagement news which he broke through his Instagram made fans flood to his social networking profiles and congratulate him. He got engaged to his girlfriend Haley Pham, a social media celebrity and an entrepreneur.

This wiki-article focused on the life of Ryan Trahan and his career along with his estimated net worth.

Ryan Trahan Grew Up Alongside A Brother

Ryan Trahan was born on 7 October 1998. The internet celebrity turned 21 years old while celebrating his birthday in 2019. Per his date of birth, his zodiac sign is Libra.

As a YouTuber, Ryan shared almost every aspect of his life. He created vlogs as a hobby and went on to turn it into his career. Even though he got intimate and introspective with details, he prevented himself from sharing details on his parents.

On several occasions, Ryan mentioned his parents, his father in particular. However, he decided not to reveal the identity and their names. As for siblings, he has a brother named Matthew Trahan.

Ryan attended Rice High School in Altair. He performed exceptionally as an athlete in the school’s track and field. Following high school graduation, he enrolled at Texas A&M University. However, he ran in some issues as he used star athlete persona to promote his brands.

Later, Ryan opted to drop out of school and focused on his business.

He Stands At An Average Height

When it came to how good Ryan Trahan looked, there never was any dispute on the topic. One could only imagine what his DM looks like based on the comments made by female admirers on his posts.

The Instagram star dons a blonde curly hair with a hunk physique. He stands at a moderate height of 5 feet 9 inches (1.75 meters) and weighed approximately 68 kilograms (149 lbs).

Everything Ryan ever possessed, was all made possible by his social media reach. His eponymous YouTube earned 2.58 million subscribers as of the spring of 2020.

Along with his success on YouTube, his following on several other social media sites increased over time. His Instagram account garnered 634k followers at the time of penning this article.

Ryan Trahan Owned A Net Worth Well Under $1 Million

The internet celebrity began his career in social media with a YouTube channel. Like any other rookie YouTubers, he started with mediocre contents.

However, he went on to profess on the quality of his digital products. Furthermore, he focused on curated content and made it more introspective in the following years.

While Ryan excelled in social media, an entrepreneurial idea hit him after he joined Texa A&M University. Soon, he started his businesses launching Neptune bottle.

The YouTuber co-founded the company with his friend to promote an eco-friendly bottle with his business. Leveraging off of his social media following, Ryan promoted the product through the channel.

Like his girlfriend, several local brands approached Ryan for the advertisement of their products. While focusing on his own, he was also endorsed by several others.

As of May 2020, Ryan’s estimated net worth hit $700,000 mark from the proceeds which he received from YouTube and his merch sales.

As of 2020, Ryan Trahan was still in a committed relationship with his social media celebrity girlfriend Hayley Pham.

As both social media stars were on YouTube, they probably met each other through that platform. However, neither of the involved confirmed the hypothesis. 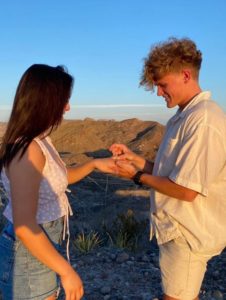 Ryan and Haley at the captured right after he proposed her to which she accepted the proposal (Pic: Ryan’s Instagram)

The in-love couple went on to feature on each other’s videos. Consequently, the pair came up with a collaborative channel in 2019. The channel gathered over 440k followers at the time of penning this article.

On 18 May 2020, Ryan Trahan and his girlfriend got engaged. Both posted pictures of the moment from the life-changing event they went through.

While his to-be wife posted with a caption We’re engaged, he took it a step further with,

“I can’t wait to build my life with you.”

Going by his enthusiasm, fans probably shouldn’t have to wait long enough to hear the announcement of the day of their marriage.