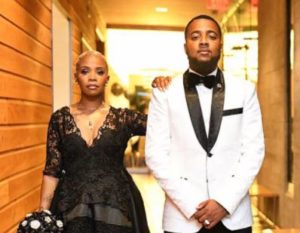 On the July 13th, 2021 episode of America’s Got Talent Roslyn R. Singleton was brought to tears by her husband Ray Singleton singing Andy Grammer’s “I Am Yours”. Later, it was known that she struggled with brain cancer and was trying her best to beat it.

So, who is Ray Singleton’s wife? Stay with this Roslyn R. Singleton Wiki to find out.

Ray And Roslyn R. Singleton: Wedding, Any Kids Yet?

Roslyn R. Singleton first met her future husband Ray back on November 6, 2016. They stumbled upon each other an escalator while Ray was going to an all-black party. As soon as Roslyn laid her eyes on him, she said “where is he going with the stupid ass sunglasses on?” To which, Ray replied I’ll be back for you in 35 seconds”

So, later Ray caught up with Roslyn and asked her for a dance but she firmly said “No! I don’t dance with strangers”. However, moments later Ray felt a tap on his shoulder and it was Roslyn giving him her phone number.

The same night the two then met up at a restaurant and the rest is history.

On May 6, 2017, Roslyn was popped the question by Ray, and over a year later in November 2018 they held their wedding.

As of July 2021, the couple shared no kids. With the struggles — battling cancer at the time, it’s understandable how the duo didn’t have any thoughts about kids.

Corresponding to her birthday, Roslyn is of the Capricorn zodiac.

Roslyn R. Singleton’s maiden name is “Royal”. She comes from a family where he parents were married for over 3 decades. Unfortunately, her mother passed away before 2012. Roslyn misses her very much and often recalls her memories over IG.

As for Roslyn’s father George Royal, he also often made it to Roslyn’s IG posts. The last we saw him was on his birthday (i.e. on August 2, 2020). Roslyn shared her childhood picture alongside him captioned,  “77 has never looked so Damn Good!!! Grateful to GOD more than ever for You!!”

Little detail about them

Roslyn R. Singleton is much shorter than Ray and stands tall at a height of under 5 feet 5 inches (165 cm).

Mentioning her distinct features, Roslyn has while dyed short hair and wore an inner nose piercing. Also, she has tattoos all over he body.

Roslyn R. Singleton is a two-time cancer survivor. She was first diagnosed with cancer during her time serving the Navy stationed in Afghanistan. Reportedly, she had a tumor the size of an orange on her brain. Fortunately, she beat the brain cancer soon after and spent the next six years cancer-free.

Again, in October 2019, a month before her first wedding anniversary. another tumor appeared (which was a size of a half-dollar). She then underwent another surgery to remove it in January 2020.

The last we saw Roslyn, she was hospitalized a week before Ray’s audition was featured on AGT in July 2021.

Did you know: Roslyn claimed that she was “humiliated” by American Airlines after she refused to obey the employees instructing her to cover a message on her sweatshirt; which read “(expletive) Cancer.” However, the airlines later apologized to her, and so did she first for “having such a strong stance on Cancer.”

As of July 2021, Roslyn flaunted 49.5K followers over her IG @iamrosroyal.

Roslyn R. Singleton has spent 8 years in the Navy until she was diagnosed with brain cancer. So, after she retired she came back home to Charlotte, North Carolina, fell in love, and got married an angle like husband Ray.

Detail about her job after she returned wasn’t shared.

But what we do know is that Roslyn and her husband together then became viral and went on to receive a lot of fans — which also means they received a lot of donations. The video the got the two viral was of Ray serenading Roslyn just before she underwent surgery for brain cancer.

They were then invited to an interview on The Ellen DeGeneres Show. Following this, AGT approached Ray about auditioning for the show.

Roslyn and Ray also ran a cameo account with took requests for $15 then.