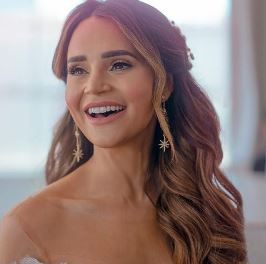 Rosanna Pansino is famous for her YouTube channel with millions of subscribers. While she openly shared about her career and job, details on her parents stayed anonymous for a very long time.

Now, scroll down this article that covers details on Rosanna Pansino’s parents (father and mother).

Rosanna Pansino was born on 8 June 1985. She earned prominence as an actress turned YouTuber chef. From a very young age, she dreamt about being an actress. She also participated in high school theatre and drama clubs.

The celebrity YouTuber was torn between the choice of whether she wanted to a YouTuber or an actress. Now that she looks back, YouTube was a better choice as she also got the opportunity to live her dream to be an actress.

Also, her work ethic was what stunned most people. She worked almost 100 hours per week. Besides that, Rosanna also published her own cookbook The Nerdy Nummies Cookbook: Sweet Treats for the Geeks in All of Us. She draws in an attractive salary to summed up to earn a total net worth of $9 million as Celebrity Net Worth reported.

As for her boyfriend, Rosanna Pansino has been dating sportscaster Mike Lamond since 2012.

Does Rosanna Pansino Have Siblings?

Rosana Pansino is an older sister to Molly Pansino. Molly, who was born on 12 August 1987, turned 33 years old. Like her sister Rosanna, Molly boasted an impressive social media reach. Her Instagram along earned 411k followers in total.

Furthermore, Molly Pansino is married and has a son, Greyson, together with her husband. The married couple welcomed Greyson on 22 January 2019. They tied knots on 5 July 2013. While she loves baking and cooking like Rosanna, taking care of her takes most of her time.

Jeanne Ellen Reardon is the mother of famous YouTuber Rosanna Pansino. Starting with details on Pansino’s mother), Jeanne Rosana was born to her mother Jean “Nana” Stimac, and her father Albert Stimac. Talking about the parents of Rosana’s grandmother, she was born to Nick Pansino and Mayme Pansino, Rosanna’s great-grandparents.

Rosanna’s grandmother Jean AKA Nana married her husband Albert on 20 August 1948 in St. Cecilia’s Catholic Church in Nashwauk. Jean Stimac loved learning and earned her AA degree. Jean lived in her hometown from 1927 to 1963.

Later, Jean along with her husband and children moved to Hoyt Lakes followed by Seattle in 1997. Rosanna’s grandmother loved collecting cameras and spoons. She loved making the baked goods and her spaghetti and meatballs were her trademarks, the very skill which Rosanna adopted from her grandmother.

Sadly, Rosanna’s grandmother took her breath her last on 7 April 2009. She struggled with heart issues that took her life to the very end.

Coming back to Roanna’s mother, Jeanne grew up with five siblings: Patricia Stimac, Stephen Stimac, Mary Stimac, Joan Gillespie, and Bill Stimac. While other siblings of Jeanne escaped public attention, her sister Patricia (Pat) Stimac had a few details online. She married Kent Buttars of Seattle and worked as a wedding officiant in the state of Washington.

Sadly, Rosanna lost her aunt Patricia on 20 July 2016 after struggling with colon cancer for a year and a half.

Jeanne Reardon married her husband Michael Robert Reardon on 25 June 1977. They celebrated their 42nd anniversary in June of 2019 before her husband passed away.

Rosanna Pansino loved her father Michael Robert Reardon more than anything and anyone. Not only Rosanna but even her fans loved him. He was born on 10 April 1951 in Lawrence, Kansas, the United States.

As for Michael’s mother, Mavis was born to her father Harvey Edwin Lukert and mother Blanche Ione Miller.

Moreover, Michael has been an important figure in the life and career of Rosanna. He also accompanied in a few YouTube videos of Rosanna. His big mustache and bald on the middle of his head was the distinct feature Rosanna’s fan often remembered about him.

Sadly, Rosanna’s father, Michael passed away on 16 December 2019 at the age of 68 in Canoga Park, California, the United States. On 18 December, Rosanna broke the bad news about her father passing away.

There Rosanna wrote that she was heartbroken after losing his 6 years old battle with Leukemia. Michael taught Rosanna many things. And to this day she carries it with herself. He was a music lover and blessed Rosanna with the music of all kinds.

Michael loved Rosanna’s mother and was happily married for over 4 decades.