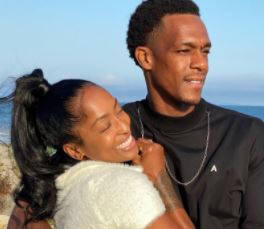 Latoia Fitzgerald is a socialite, social media star, and fashion designer. In 2020, she also soared to popularity as NBA player Rajon Rondo’s girlfriend.

This Latoia Fitzgerald bio reveals facts about Rajon Rondo’s girlfriend including her age, son, and net worth. Furthermore, it highlights her fight, relationship with Meek Mill, and family.

Latoia Fitzgerlad was born to her parents: her mother Corinne Baskerville Redmond and her anonymous father.

Not only did Latoia saw her parents divorced one another, but she also witnessed her mother marry her step-father who was a photographer.

What’s more, Latoia’s mother, Corinne worked as a seamstress. As of 2021, she was the designer for the brand “Painted Thighs”.

As for her siblings, Latoia grew up with her sister, Wolfe Leone. A pop musician by trade, Wolfe dropped her mixtape titled “Maktub” in 2017.

Growing up, Latoia and her sister visit fabric stories with their mother. While Wolfe found the trip boring, she adored the experience.

Per sources online, Latoia weighs under 57 kilograms. Her measurements, on the other hand, read: 35-25-37 inches.

From her career as a fashion designer, Latoia Fitzgerald flaunts at least $500 thousand net worth.

Obsessed with fashion design since childhood, Latoia is a self-taught designer. Soon after learning sewing from her mother, she started creating her own designs.

Admittedly, the first thing Latoia learned to make was a pair of pants.

Latoia first launched a kids’ clothing line called Dillonger Clothing. Named after her son Dillon, Dillonger Clothing laid the groundwork for her flagship clothing line Lionne Clothing. According to the company’s website— “Lionne Clothing was born in 2018 and is one of the latest independent global fashion houses in the world today. Our innovative women’s wear brings style and sophistication to the forefront. Keeping queens in the mind, our collections balance edge and elegance. Our quality over quantity approach allows us to handcraft unique designs for the modern-day queen who is strong but soft – street but chic.”

About the hardest part of launching a fashion line, Latoia said— “The hardest part about launching a fashion line is the business side of things. Naturally, I’m a creative person, but I had to learn to be a businesswoman. I’ve been through a lot of ups and downs on the back end of my business. I’m still learning and having to handle things I don’t like to deal with. People say they want to start a clothing line but have no idea how hard it is and the intricacies of a fashion brand. If things aren’t together on the business side, your brand will suffer.”

Latoia Fitzgerlad played Meek Mill’s love interest in the rapper’s music video for the 2017 single “Fall Through”. She and the “Dangerous” hitmaker didn’t seem to build a romantic connection during the shoot.

IMDB, meanwhile, lists Latoia as simply the woman in the video’s credits.

Latoia Fitzgerlad shares a son, Dillon with her ex-husband, who also happens to be her baby father.

Dillon arrived in Latoia’s world in May 2008. As of 2021, the mother-son duo was residing in California.

Not only is Dillon Latoia’s biggest joy, but he is also her inspiration.

Before meeting Latoia, Rajon had two kids — a son and a daughter — with his now-ex, Ashley Bachelor.

In July 2020, Rajon and Latoia allegedly got into a fight with a woman named Toktam Jorshari. December that year, Toktam filed a lawsuit accusing the couple of “assault and battery, inflicting emotional distress, and conspiracy.”

Per the lawsuit, the alleged fight took place in the parking lot of their Los Angeles apartment complex. Toktam claimed the couple shouted vulgar words at her for parking her vehicle close to the NBA pro’s SUV.

On the surveillance video released by TMZ, Latoia was seen punching and hitting Toktam while Rajon separates them.

According to the documents, Toktam was seeking $1 million in damages. For their part, Rajon countersued her not wearing a mask and the injury caused to his thumb.