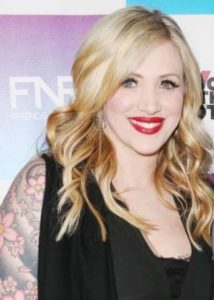 Rochelle DeAnna McLean is a hair-stylist, make-up artist, model as well as a dancer. However, she is better known as the wife of singer-songwriter, actor, dancer, and model AJ McLean who is also notably a member of the American vocal group Backstreet Boys.

Fans, who love keeping a tab on Rochelle and AJ, have forever admired the pair. Once again, as the news of AJ competing on the 29th season of Dancing with the Stars surfaced, they could not help but want to know their story again— of everything that’s been going on in their lives in the recent times.

Find out everything including Rochelle’s wiki and career.

Rochelle, before she got married went by the name Rochelle DeAnna Karidis. She is also nicknamed RoRo or Ro.

She grew up celebrating her birthday, every year, on the 7th of October. So, one can say her zodiac sign is Libra.

Rochelle DeAnna McLean held a blend of Mexican, Greek, and Italian ethnicity from her parents who had an abusive and volatile marriage.

Her family moved to Santa Clarita, California when she was young. She has two older brothers, Perry and Andre, and a younger sister, Priscilla.

Raised in Santa Clarita, she discovered her love for performing early on. Between two to four, her mother signed her up for dance lessons which comprised all of ballet, jazz, tap, hip hop, rhythm tap, rhythm hip-hop, contemporary, ballroom, salsa, merengue, and gymnastics.

Her mother then got her into modeling. All along the runways, Rochelle also pursued dancing and print works.

She worked really hard to overcome the rare bad case of self-image that she developed after being bullied and body-shamed for her weight, as a child.

Rochelle DeAnne McLean who wears heels to match the height of her 5 feet 9 inches tall spouse, has in her both arms this tattoo that people can not easily take eyes off. Dozens, colorful rose tattoos spread full length on her arms.

Apart from modeling, Rochelle DeAnna McLean decided to try Cosmetology, so she attended Paul Mitchell the School in Sherman Oaks.

Over the course, she has worked as a hair-stylist and make-up artist for several television shows including Project Hollywood and Nick’s Big Show, and short films including Population Suicide and Family Jewels.

This way, Rochelle DeAnna McLean reportedly pulled in an estimated $5 million net worth.

While her musician-dancer spouse was reported with a fortune of $45 million, back in 2010.

The day December 17, 2011, marked Rochelle DeAnna and AJ McLean’s wedding day. They had an incredulously planned goth-themed evening ceremony, that took place under a clear tent on the Crystal Lawn at the Beverly Hills Hotel.

In an intimate setting adorned with romantic chandeliers, Rochelle had walked down the aisle to the song “November Rain” by Guns N’ Roses.

The bride wore a sleeveless, black Vera Wang gown and her groom looked equally dashing in a black suit and red bow tie. 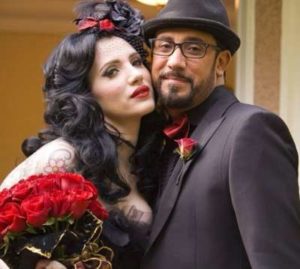 Years later, they continued sharing the throwback pictures from their big day.

Besides, they have two kids (both daughters): Ava Jaymes McLean (born on November 27, 2012) and Lyric Dean McLean (born on March 19, 2017). The McLean girls make regular appearances on both of their parents’ social media. 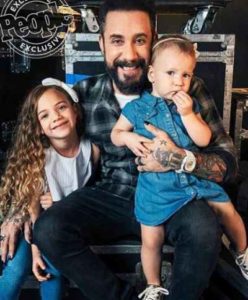 Rochelle first “laid eyes” on AJ when she was still a high school student. She had attended an “Into the Millenium” concert in 1999 and the next year, they officially met at Choreographer’s Carnival.

That was that and several years later, they reconnected and started dating in March 2009. Shortly after about 10 months of dating, AJ popped the question during a trip to Las Vegas.

AJ, who struggled with sobriety for many years, often credited his wife and his family for helping him overcome his addiction. He was rehabbed several times in 2001, 2002, and 2011, for alcohol abuse and depression.

On the 2nd of September 2020, it was announced that the former American football tight end Vernon Davis was...