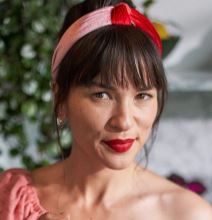 Rachel Khoo is a celebrity chef who has starred on TV shows for almost a decade. And in March 2021, she returned to a new cooking competition show titled Great British Menu along with other shows. Along with it, Rachel’s life as a married woman and details on her kids.

Scroll down to learn more about Rachel Khoo and her husband, net worth, and parents!

Rachel Khoo was born to her parents: a Malay-Chinese father and an Austrian mother. As reported, her parents allegedly met each other in Croydon, a South London town where she was born and raised. Her father had a job in IT; so she and her family moved to Germany. Whereas, very little was shared about her mother.

Coming to the details of her siblings, Rachel is an older sister to her brother Michael Khoo. Unlike Rachel who enjoys the spotlight, Michael keeps himself away from the public attention.

The Khoo siblings inherited mixed heritage because of their parents. Because of this reason, Rachel Khoo owned Asian British ethnicity.

Rachel Khoo attended fame a long time before. Her Facebook page gathered 205k followers as of March 2021. Likewise, her verified Instagram account earned 385k followers. She actively shares recipes and promotes her show on the platform. In the same way, her Twitter account earned 111.7k followers.

Reportedly, Rachel Khoo is worth at least $1 million.

Rachel Khoo grew up in a family from diverse backgrounds so there were foods from both of the cultures. But once she moved to Germany with her father where she attended a convent school. Later, she returned to England to sit her General Certificate of Secondary Education.

However, Rachel had no plans of becoming a chef until she graduated from Central Saint Martins. She earned her degree from the university in arts and design. Then, she started her career as a fashion PR for the clothing chain Thomas Pink.

Rachel then realized food was always her passion and instead of designing, fashion, and art, she would rather pursue that to make a living. And what place to learn about food than France that provided diverse cuisine.

With $825 and a desire to do something in culinary art, Rachel moved to Paris leaving behind her parents in awe and her job. She joined La Cordon Bleu Culinary School. She also joined La Sorbonne for the French language and got a job as an au pair with a Parisian family.

In 2010, she graduated from culinary school and quitted her job to start a pop-up restaurant in the mini flat. Rachel then earned fame as a cookbook author publishing a book titled The Little Paris Kitchen in 2012. As she shared, her cookbooks are her personal journey.

Furthermore, she presented TV shows such as Rachel Khoo’s Kitchen Notebook: London, My Kitchen Rules, Rachel Khoo: My Swedish Kitchen, and Rachel Khoo’s Simple Pleasures. In June of 2020, she made headlines after putting her $913,000 two bed-room flat up for sale.

In 2021, Rachel starred in a cooking competition show Great British Menu. Speaking about the show with Radio Times, she shared that the show allowed her to meet incredible people. The competitors in the show comprised designers, architects, and even designers.

As a judge, Rachel’s only job was to taste eight-course in a day. She didn’t travel anywhere and judged what best food British restaurants offered.

Robert Wiktorin is a Swedish chef by profession.

Rachel Khoo married her Swedish husband, Robert Wiktorin in 2015. Before her marriage, she dated Robert for a while and got engaged in 2014.

How Many Children Do Rachel Khoo And Robert Wiktorin Share?

Rachel Khoo and her husband, Robert share two children as of March 2021. The couple welcomed their first child, a baby boy in 2016. However, she addressed her pregnancy only in February of 2017.

She officially announced giving birth through her website and took her fan by surprise.

The cooking show judge diligently kept her pregnancy private. She decided to keep the news to herself, her friends, and her family. And only after that, she was ready to share the news with the world.

But the filming of the show was a must and they strategically made it happen without giving away any beans. Her production team was careful enough to use props on the set such as a pillow and laptop as a way to conceal her pregnant belly.

As of March 2021, Rachel Khoo and her husband Robert Wiktorin were still married. They were happily enjoying the company of each other, raising their kids, and residing in Stockholm.