NFL star Earl Thomas had quite a night on 13 April of 2020. A day before he had a drunken argument with his wife Nina Thomas. But following that, Nina caught him with two other women in a rental home.

Infuriated, Nina held him at a gunpoint with a loaded pistol. After the incident, people dug deeper into the past life of Nina Thomas in search of her criminal history.

This wiki-article based on the life of Nina Thomas assist readers to get to know her better, so scroll down.

Nina Thomas was born on 10 October 1989. She turned 30 years old while celebrating her birthday in October of 2019.

As per her date of birth, her zodiac sign is Libra.

Nina Thomas was born to her father Troy Heisser and her mother Anita Baham. Besides that, no further details on her parents have been shared.

More on her family: Nina, her younger sister Kayla Baham-Heisser and her brother Ray Baham-Heisser grew up sharing her parents’ love.

As for her Job, Nina is a fashion enthusiast. She has made a few runways appearances including in the Arizona Super Bowl fashion show.

She also attended the 2020 Off the Field player’s wives Fashion Show at Miami Design District in Miami Florida. Along with that, Nina also did a few modeling gigs with several national brands.

In 2014, she modeled for #momlife, a local clothing line.

Talking about her measurements, Nina stands at an average height of 5 feet 4 inches (1.62 meters). Along with that, she weighed 78 kilograms (171 lbs) at the time of penning this wiki-article.

Moreover, Nina’s Instagram sheltered pictures of her stunning beauty. Her measurement of 35-25-36 inches gave her an attractive body desired by many.

Nina and her husband Earl Thomas met each other in high school. He proposed to her at his football camp in Orange, Texas in the summer of 2015. 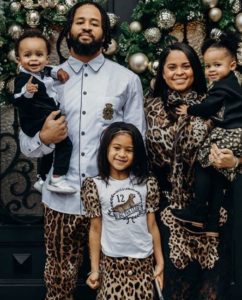 Nina with her husband Earl and children in December of 2019 (Pic: Nina’s Instagram)

A year later, the couple got married at Chateau Cocomar in Houston, Texas. The wedding was graced by several athletes and entertainers including singer Ciara and Anthony Hamilton.

On their wedding day, Earl donned a crown and a cape while Nina had a beautiful floral white dress. The majestic looks of the bride and groom stole everybody present on the auspicious day.

On 13 April 2020, Nina caught her husband Earl Thomas cheating on her in Austin, Texas.

As the story unfolded, Nina found Earl and her brother-in-law in a rental home downtown with two other women. As she entered with her two accomplices, she pointed a black pistol on Earl’s head from less than a foot away.

But she justified the commotion as a way to scare her husband and was unaware of the round in the chamber.

Police found her chasing Earl with a knife in the parking lot at 3:41 AM. Earl was holding a pistol which later on turned out to be the one he had snatched from the hands of Nina. Police ordered the couple to drop their weapons to which they complied.

Following the incident, Nina was charged with first-degree family violence for committing a burglary to assault with a firearm.

The NFL star’s wife was released from prison the next day of the arrest. She paid court-ordered $25,000 as payment for bail.

Conclusively, the court ordered Nina her presence at Travis County District Cout on the 8th of June 2020.