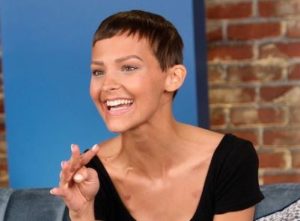 If you have been watching NBC’s America’s Got Talent, then you should know how hard is it to please judge Simon Cowell. Well, Nightbirde not only stole his heart but also stole the Golden Buzzer from him on the show’s 16th season.

So, who is she? Delve into her personal over this Nightbirde wiki.

Corresponding to her birthday, Nightbirde is of the Capricorn zodiac.

As of 2021, she was living in Los Angeles, California. Before that, she lived in Nashville, Tennessee.

Nightbirde’s real name is Jane Marczewski. But she took on her ex-husband’s last name “Claudio” after the wedding.

As for why she chose “Nightbirde” to be her stage name, she mentioned that it was from a dream she had before the cancer diagnosis. She dreamt about birds singing in the darkness for three straight nights. Thus, “Nightbirde”

Little info about her siblings

Unfortunately, Nightbirde’s parental grandfather, Mitchell George Marczewski passed away at the age of 76 in July 2013.

It was September 2017, when Nightbirde was first diagnosed with stage 3 breast cancer. She then immediately underwent chemotherapy, rocked a bald look, and was declared cancer-free in July 2018.

However, she again went on to suffer from cancer a few months later. Fortunately, she was blessed for the second time and she beat cancer in July 2020. To celebrate, she even took it to her IG to write, “BUT THIS TIME FOREVER.”

By the time, Nightbirde was on AGT, she has had her third cancer. She shared, “Last time I checked, I had some cancer in my lungs, in my spine, and my liver.”

If you want to support Nightbirde, go donate here at her “gofundme” cancer treatment fund. As of June 2021, it had raised $88 thousand out of $100 thousand.

Nightbirde On AGT (America’s Got Talent)

Nightbirde stepped onto America’s Got Talent season 16 with a story about her battle with cancer and a heartbreaking original song titled “It’s Okay”. The song was admittedly the true story of her life. No wonder, the audience felt every word. Receiving the Golden Buzzer, Nightbirde directly moved up to the semi-finals.

In August 2021, Nightbride dropped out of the show to focus on her fight against cancer.

Nightbirde’s net worth was under $300 thousand as of 2021. However, considering the popularity she was garnering this may change soon.

The musical journey for Nightbirde began after she left Lynchburg, where she led worship at her church and performed at local venues. But at the time, she felt like she didn’t know herself, neither liked herself. So, she decided to lay down music for a while and committed to the Lord that she would take three years off from music.

But the year and the month (September 2017) that she was supposed to resume music was the time she got diagnosed with stage 3 cancer. She then had to wait another year for a full recovery.

Finally, in March 2018, with a renewed perspective, she wrote her first song called “Girl in a Bubble.” It had over 150 thousand plays on Spotify. Also, her songs like “It’s ok” and “New Year’s Eve” were quite popular among her fans.

In light of her education, Nightbirde graduated from Liberty University Jane in 2013.

Did you know: Nightbirde regularly updated her blog at “nightbirde.co”

Nightbirde never refrained from talking about her broken marriage with her ex-husband, Jeremy Antonio Claudio. Over her site, she even mentioned, “the man I married said he didn’t love me anymore.”

So, who is he? Nightbird’s ex-husband is an aspiring pop artist like her. A Brooklyn, New York native, Jeremy was pursuing his career in Nashville, Tennessee. He is a year older than Nightbirde and celebrates his birthday on the 8th of August.

Reportedly, Nightbirde and Jeremy were engaged and married just within 8 months of 2015. The two were engaged on 17th March and six months later in September, they tied the knot at the Sparta Restaurant & Coffee Shop in downtown Newark, Ohio.

As for how they broke up, Nightbirde shared an audio clip over her IG captioned,

“DON’T MISS THIS ONE. It’s the realest I’ve ever been about the collapse of my marriage and the lies that were keeping me sick. This is part 4 of a series with the therapist that saved my life with the truth. Find the link here @theplaceofrest.”

Go check the link shared to learn “the truth.”

The last we saw Nightbirde and Jeremy as husband/wife was before June 2019.

Is Nightbirde Dating Anyone?

From the looks of it, no, Nightbirde doesn’t seem to be dating anyone as of Aug 2021. She might be still healing from the trauma physically, and emotionally as well. After all, her husband left her just when she needed him the most.

“The cancer was gone. But when my brain caught up with it all, something broke. I later found out that all the tragedy at once had caused physical head trauma, and my brain was sending false signals of excruciating pain and panic.”